The director on what makes Verdi's final masterpiece tick and how his production embraces both the Italian and English elements of the opera. 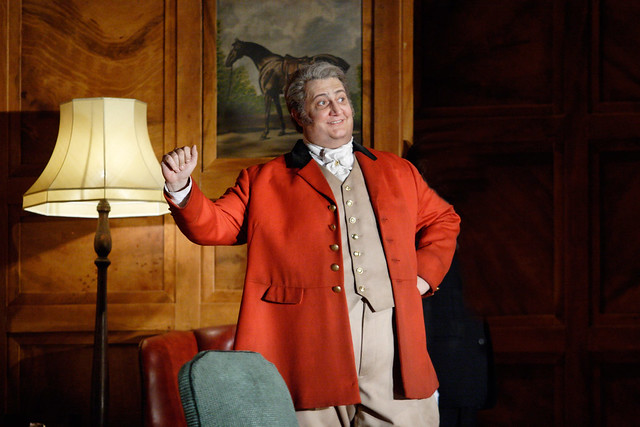 Passion and enthusiasm emanate from director Robert Carsen as he sits down to discuss his new production of Falstaff.

A few weeks into rehearsals in one of the Royal Opera House’s two hanger-like rehearsal studios, Robert is relishing the challenge of tackling what he believes to be one of the greatest works of lyric theatre. 'It demonstrates Verdi’s extraordinary ability to tell a story through music,' he enthuses, 'Verdi’s Falstaff is written by a composer who at that time considered himself quite advanced in years. Verdi knew it was going to be his last opera and it has these autumnal colours plus great joy, wit and an appreciation for youth. It’s the sort of piece you don’t get a chance to direct all that often. Falstaff is one of those magical pieces you cannot describe the DNA of, like Don Giovanni. There’s no reason why it should be as incredible as it is, but it is…'

Robert explains that behind the overt comedic farce of the opera lie other, subtler layers and the director is keen to profile the piece as a social commentary as well as an opportunity for laughs. 'I love that it’s not a black and white piece. It features a rich mix of elements and as a director you have to make sure that at any one moment in the production, you’re juggling them all.'

The character of Sir John Falstaff himself typifies this multi-faceted approach. 'Falstaff has this acute sense of his own worth and his own abilities. He’s not just some pompous, blown up fool and that’s part of the comedy,' Robert muses, 'Although his self-importance is at times absurd.'

Alastair Elliott as Bardolph, Ambrogio Maestri as Falstaff and Lukas Jakobski as Pistol in rehearsals for Falstaff © Catherine Ashmore/ROH 2012

The cast of Falstaff in rehearsal © Catherine Ashmore/ROH 2012

Together the creative team including Paul Steinberg (sets), Brigitte Reiffenstuel (costumes) and Peter van Praet (co-lighting designer with Robert Carsen), have decided to set the production in the late 1950s, a period which they were immediately drawn to: 'I couldn’t imagine doing it in the Elizabethan period so we’ve opted for post-war Britain. There were parallels in terms of class struggle and the rise of the middle classes, represented in the opera by the very rich Ford, and the twilight of the aristocracy represented by Sir John who’s clinging to his aristocratic roots.'

The upper class is represented visually through references to hunting and costumes featuring stylish tweeds, some of which have come from famed cloth maker Harris Tweed. Robert expects that this look will be lapped up by the Italian audience when the piece transfers to Milan next year to open La Scala’s Verdi bicentenary programme. As to cultural ownership of the piece, the director has catered for both audiences: 'The piece is very English because it’s based on this much-loved Shakespearean character but it’s also very Italian - the libretto is in Italian, it was written by an Italian and the composer was Italian. It is something that the English feel belongs to them and the Italians feel belongs to them.'

He expects the gastronomic theme to appeal to both audiences and a visit into the rehearsal studio reveals an array of prop food, from whole salmons and roast beef to summer puddings and garden salads. 'Falstaff loves eating and drinking so we wanted to celebrate that. We’ve tried to incorporate elements of food and drink into every scene.'

The food consumed through out the show has been rendered in impressive, appetite-whetting detail by the Royal Opera House props team: 'They’ve done the most incredible job. I’ve never seen anything like it - not just the quantity but the way it’s been done. It looks unbelievably real and it feels absolutely right.'

As well as his work directing operas Robert has also directed musicals – most recently My Fair Lady (with an English cast for the Theatre du Chatelet in Paris), which recently transferred to the Mariinsky Theatre in St. Petersburg (with a Russian cast). It’s a little-known fact that one of his early directing jobs was a Disney show in Paris which he also wrote called Buffalo Bill’s Wild West; it’s now been running for 20 years. He also has directed two productions for Andrew Lloyd Webber.

What’s the particular appeal of opera, and what does he want the audience to take away with them after seeing Falstaff?

'When you go to the opera, it should be an experience which is as rewarding for the head as for the heart. In fact there's nothing quite like it. A comedy can create a sense of catharsis as much as tragedy, but you are looking at life wearing a different pair of glasses. This piece has a very joyous ending, but the richness comes from everything that has come before, including Shakespeare and Verdi through to our times; hopefully,' he adds smiling, 'we can bring that off.'

This article has been categorised Opera and tagged behind the scenes, by Robert Carsen, director, Falstaff, interview, Production, verdi