Verdi' great tragic opera to be relayed across the UK on 17 September. 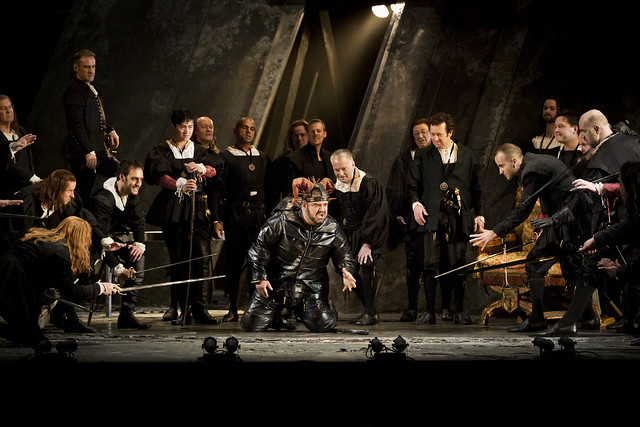 Dimitri Platanias as Rigoletto, Zhengzhong Zhou as Marullo and Pablo Bemsch as Matteo Borsa with the chorus in Rigoletto © Johan Persson/ROH 2012

David McVicar's dark and potent production of Verdi's Rigoletto will be shown free on outdoor BP Big Screens across the UK on Wednesday 17 September 2014.

The performance stars Dimitri Platanias, Piero Pretti and Eri Nakamura and will be conducted by Maurizio Benini.

Rigoletto, court jester to the libertine Duke of Mantua, is cursed by the father of one of the Duke’s victims for his irreverent laughter. When the Duke seduces Rigoletto’s daughter Gilda, it seems the curse is taking effect. Find our more with our 5 things you need to know about Rigoletto.

An important work in the history of opera

Verdi described Rigoletto as his best opera and it has since become one of the art form's most performed and popular works. With it he shook up the operatic establishment, dispensing with many of the conventions such as an entrance aria for the leading lady, and eschewing the tradition of ending acts with ensembles. Find out more about what makes Rigoletto such an important work in the history of opera.

Though subverting many operatic conventions, the opera features some of the art-form's most iconic musical moments, including the Duke of Mantua's famous 'La donna è mobile' aria and Gilda's ode to innocent love, 'Caro nome'.

Highlighting the cruelty and degeneracy at the heart of the court of Mantua, David McVicar's production revels in the opera's darker elements. With scenes of nudity and scenes of a sexual nature, it is not be suitable for younger audiences.