Rigoletto to be screened in cinemas on Monday 22 July

Get ready with introductory films, production photos and features. 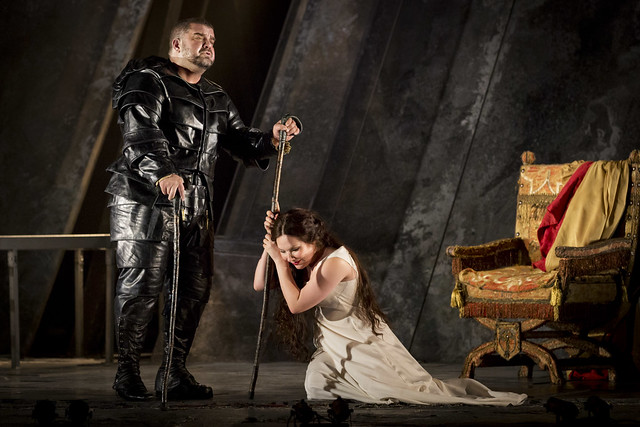 Audiences will have another chance to see David McVicar's Royal Opera production of Rigoletto when it is screened in UK cinemas on Monday 22 July.

The opera tells the story of Rigoletto, court jester to the libertine Duke of Mantua. Rigoletto is cursed by the father of one of the Duke’s victims and when Rigoletto’s daughter Gilda comes to the attention of the Duke, it seems that the curse is taking effect. Alongside Le nozze di Figaro and La Fille du régiment, the opera follows a grand operatic tradition of problem parents in opera.

Rigoletto is one of Verdi's masterpieces. Music Director of The Royal Opera Antonio Pappano believes it's 'one of the most important and iconic titles in the operatic canon'. Watch Antonio's introduction to Rigoletto (guidance: contains nudity).

Vittorio Grigolo as Duke Of Mantua, Zhengzhong Zhou as Marullo and Pablo Bemsch as Matteo Borsa with the chorus in Rigoletto © Johan Persson/ROH 2012

Dimitri Platanias as Rigoletto, Zhengzhong Zhou as Marullo and Pablo Bemsch as Matteo Borsa with the chorus in Rigoletto © Johan Persson/ROH 2012

Vittorio Grigolo as Duke Of Mantua, Christine Rice as Maddalena and Dimitri Platanias as Rigoletto, Ekaterina Siurina as Gilda in Rigoletto © Johan Persson/ROH 2012

One of opera's great villains

In the Duke of Mantua, Verdi created one of opera's most famous villains. Womanizing and carefree, the Duke is given one of the art-form's catchiest musical moments - 'La donna è mobile' (so memorable was the tune that prior to the opera's 1851 premiere, Verdi forbade anyone associated with the production to so much as whistle the aria in public). Watch tenor Vittorio Grigolo speaking about the character of the Duke of Mantua

Read audience reactions to the 2012 cinema relay, and add your own review.

This article has been categorised Opera and tagged by David McVicar, Film, Production, Rigoletto