Research and development: a hidden but vital part of the production process

Associate Director of Opera John Fulljames takes a look at a vital, but usually hidden, aspect of staging a work. 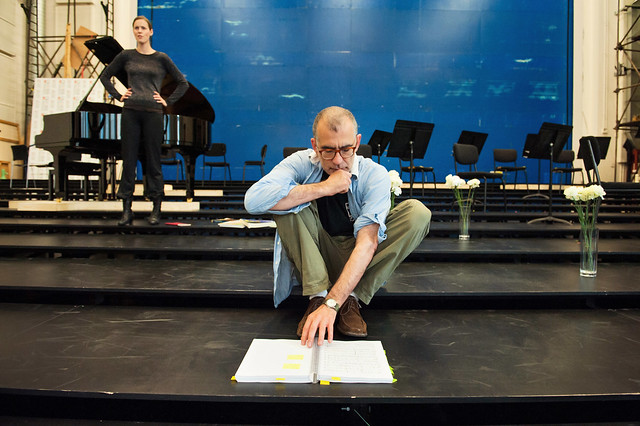 The process of getting an opera on to the stage is a lengthy one - operas generally take 2–5 years to gestate and write and we have a large number of projects under commission and in development at any one time.

The Royal Opera presents many new operas each year and so of course we are also very active in the development of that work through its many stages, the first of which is the research and development (or 'R&D') stage.

R&D can take many different forms – each project is different as each writing team has their own way of working; some artists just need a secluded bunker to write while other composers are keen for a long workshop process. Sometimes it's focused on learning about particular technology or instruments, sometimes it's about addressing specific dramaturgical questions or engaging with specific audiences. It's clear, though, that there is no formula – every opera is made differently. We try to shape the development process around the artists rather than proscribe how opera should be written. Case in point are some of the operas currently in development.

Workshops with young people recently helped director Katie Mitchell and composer Mark-Anthony Turnage understand how young people respond and listen to opera and music in advance of a new opera for young audiences; while Luke Bedford, David Harrower and Bijan Sheibani spent time together with a group of actors at the the Royal Opera House reading the latest draft of David’s libretto for their new opera, Through His Teeth, which comes to the Linbury in April 2014.

Technology is increasingly used, for example in some invaluable studio sessions between video artist Tal Rosner and composer Chris Mayo, in which a lot of computers and projectors were used in the first exploratory stages of an opera closely integrating music and video technologies.

We also work closely with partners - Opera North's Noye’s Fludde offered composer David Bruce a full orchestral workshop earlier in the year for his opera The Firework-Maker’s Daughter, which played in the Linbury Studio Theatre April 2013, and together with both Aldeburgh Music and Opera North we are developing five operas that will have their premieres over the next three years.

Of course such work is closed to the public, as it's important we create a safe and private space for exploration and learning – but sometimes we find ways to show work-in-progress to an audience. It was a joy to see excerpts from Julian Joseph’s new opera presented to a packed Linbury audience as part of Deloitte Ignite recently and increasingly we're seizing on opportunities for composers to talk about and share reflections on process. Last Season, Sound and Music lead a fantastic event for composers and writers here and and we are looking forward to other events like this in the future.

There are many ways of supporting the development of new work at ROH and seeing inside the journey of an opera from the first seed of an idea to the first performance. Email to find out more.

We're grateful to the PRS Foundation for supporting our new work development activity.

This article has been categorised Off stage, Workshop and tagged process, R&D, Rehearsal, Research and Development, workshop