To celebrate Bonfire Night, a look back at the disasters that razed the ROH to the ground in 1808 and 1856. 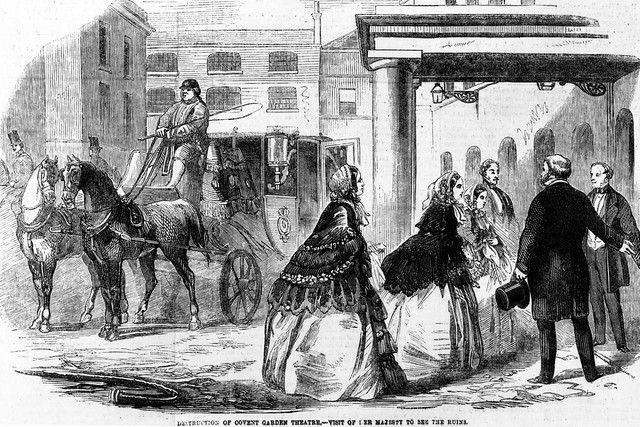 Since 1605, when Guy Fawkes planted 36 barrels of gunpowder beneath the Houses of Parliament, we've celebrated 5 November as Bonfire Night. Fires are lit, effigies are burnt and the skies across England sparkle with fireworks; whether to celebrate Fawkes's failure or to honour his attempt to overthrow the government is up for debate.

While the Gunpowder Plot was successfully foiled and the Houses of Parliament escaped an explosive end, the Royal Opera House has a less fortunate history: in the 19th century, the theatre burned to the ground twice in just fifty years.

The first theatre on the Covent Garden site was opened by theatre manager and actor John Rich in 1732. Built next to the city’s principal fruit and vegetable market (which moved to Vauxhall in 1974), it was primarily a playhouse for the first 100 years of its existence. However, in 1808, the theatre was destroyed by fire. The pipe organ of Baroque composer George Frideric Handel, who frequently performed there from 1735 until his death in 1759, was just one of many valuable items lost.

The theatre was rapidly rebuilt and re-opened in 1809. Over the next thirty years, the theatre became increasingly popular with high society. By the 1830s, Queen Victoria and Prince Albert would frequent the Royal Box up to four times a week in high season. However, in 1856, disaster struck once again. The theatre, hired for a masked ball by a man known as the 'Wizard of the North', burned to the ground following a night of drunken revelry and had to be completely rebuilt.

Much of the current Royal Opera House building dates back to this rebuild, including the beautiful velvet-clad auditorium, a Grade 1 listed building that seats some 2,250 people. It has been used as a furniture repository (during World War I) and a dance hall (during World War II). The historic auditorium is now surrounded by a 21st-century labyrinth of modern offices, state-of-the-art backstage areas, dressing rooms and workshops. Needless to say, these days it is also equipped with fire alarms. From time-to-time, the entire cast of an opera or ballet are evacuated into the Covent Garden piazza in full costume, much to the delight of passersby.


The Royal Opera House of today is the result of an extensive renovation that took place between 1997 and 1999. Over the course of two years the auditorium was re-raked, re-seated, re-painted, re-gilded and re-lit, and the surrounding building equipped with high-tech storage mechanisms, new public areas and studios. Take a look at just what goes on behind the main stage:

From the light and airy ballet studios that overlook the piazza, to the cavernous set-storage carousel three stories beneath the stage; from the rooftop props workshop, to the enormous set-construction area built on a rotating floor; the building is an architectural feat.

Monitoring and maintaining the auditorium and its historic contents is the responsibility of the ROH Collections Department, who carry out and oversea extensive renovations and conservation projects. Most recently, a frieze of Queen Victoria in the Auditorium was conserved.

Take a look behind the scenes and find out more about the colourful history of the Royal Opera House on one of our public tours. For full details, visit our Tours pages.