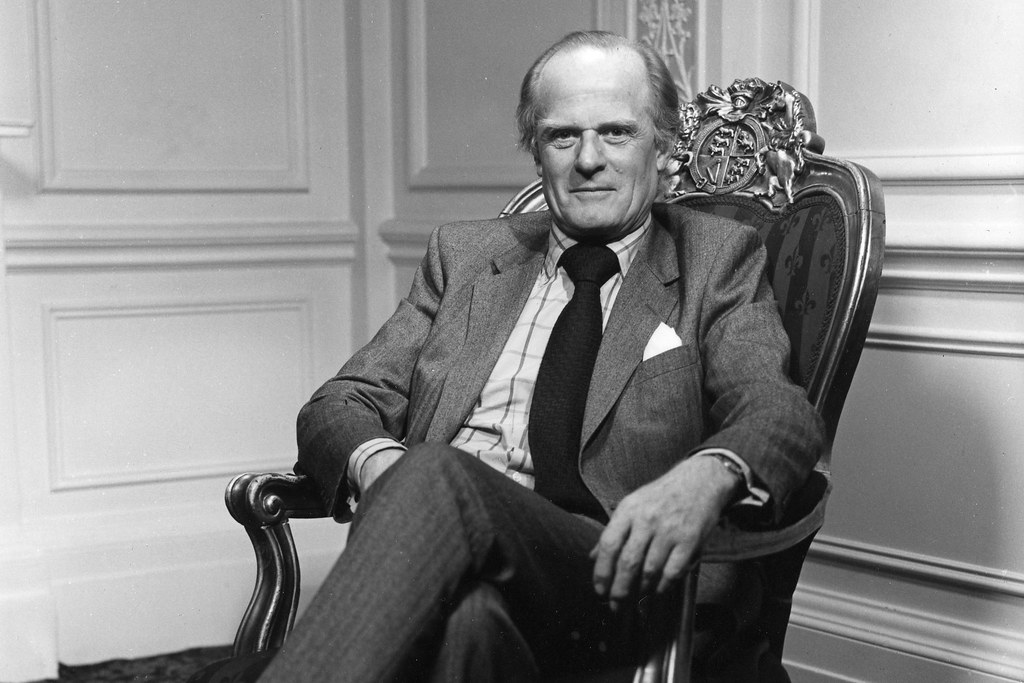 A leading figure in British music administration, John Tooley was General Director of the Royal Opera House from 1970 to 1988.

Widely known as ‘JT’, John Tooley was the most musical of the Royal Opera House’s administrators, and as a teenager played the oboe and studied singing. He was educated at Magdalene College, Cambridge, gained management experience at the Ford Motor Company in Dagenham and spent three years as Secretary of the Guildhall School of Music & Drama. He joined the Royal Opera House in 1955 as assistant to its General Director David Webster. The 31-year-old Tooley was soon managing major events as well as the day-to-day running of the companies.

He succeeded Webster on his retirement in 1970, smoothing over the transitions both from Webster’s to his governance and in The Royal Ballet, as Kenneth MacMillan took over directorship from Frederick Ashton. Tooley always regarded The Royal Opera, The Royal Ballet and Sadler’s Wells Royal Ballet (later Birmingham Royal Ballet) as a large family. He remained General Director of the ROH for 17 years, retiring, with some reluctance, in 1988 at the age of 64.

Tooley believed it essential to attend as many performances as possible, and was a familiar sight in the old Crush Bar, leaning beside a large black telephone, awaiting news from backstage. He would always share a joke with Peter the barman, was brilliant at dealing with performers’ nerves and other problems, and treated one and all alike with courtesy and charm. Artists including Maria Callas, Joan Sutherland, Margot Fonteyn and Rudolf Nureyev, Jon Vickers and Plácido Domingo found him sensitive and sensible to work with. Royal Opera Music Directors Georg Solti, Colin Davis and Bernard Haitink enjoyed the stability that he provided, and he nurtured the burgeoning international careers of singers including Thomas Allen and John Tomlinson. He was highly regarded by the heads of other international companies.

The Royal Ballet enjoyed golden years during Tooley’s tenure. MacMillan produced some of his greatest works, including Manon (1974) and Mayerling (1978). Ashton returned to stage the masterful A Month in the Country (1976) and the spectacular partnership of Margot Fonteyn and Rudolf Nureyev was followed by that of Antoinette Sibley and Anthony Dowell. John Tooley also set in motion the search for a proper home for Sadler’s Wells Ballet. This was achieved after his retirement, when the company moved to Birmingham.

He was inclined towards more naturalistic productions, particularly as they allowed international singers to perform with limited rehearsal time. ‘During the 1970s and 80s’, Tooley wrote in his memoir In House, ‘Covent Garden was accused of playing safe. In some ways we did – not unimaginatively, but in an attempt to create productions which would stand the test of time and permit us to engage the world’s greatest singers to appear in them.’ Many star artists accepted more modest fees at the Royal Opera House than elsewhere, because they enjoyed the artistic opportunities on offer. Tooley had increasingly strong opinions about what he called ‘change for the sake of change’ and was delighted that John Copley’s brilliantly traditional production of La bohème remained in The Royal Opera repertory for 41 years.

Tooley felt that the arts should be accessible to all, and not only kept seat prices down but opened up the Royal Opera House in various ways. The Midland Bank sponsored The Royal Ballet to perform in a tent in Battersea Park, and The Royal Opera (and on occasion The Royal Ballet) to create a ‘Prom’ space in the stalls. Many productions were televised on BBC 2 and broadcast on Radio 3, and live relays to a screen in Covent Garden piazza took place whatever the weather. Tooley also initiated Phase 1 of the Royal Opera House’s renovations, providing better rehearsal facilities and dressing rooms for opera and ballet.

Tooley loved the human voice and understood the challenges facing opera singers. In retirement, he was involved with trusts including the Britten and Walton Trusts and the Nureyev Foundation, and was Advisor to the Istanbul Foundation for Culture and Arts (1993–2008). He received a knighthood in 1979. His book about his time at Covent Garden, In House, was published in 1999.

'Sir John Tooley was a true gentleman and loved the people he worked with. He gave so much of himself to the Royal Opera House during his time as General Director in the 1970s and 1980s. He will be greatly missed'.