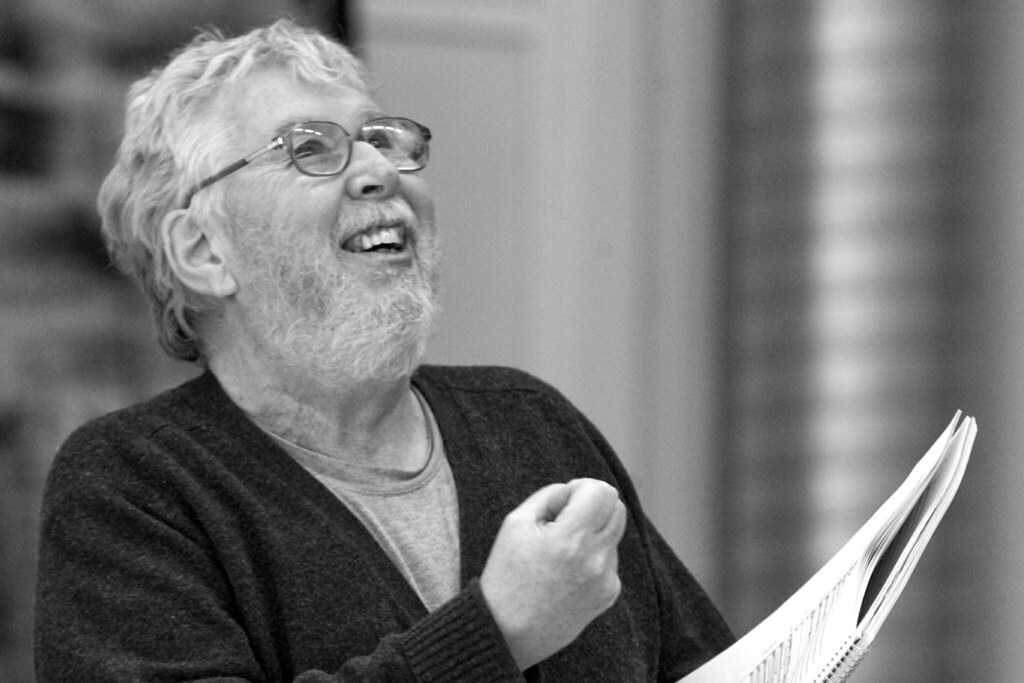 Harrison Birtwistle in rehearsal for The Minotaur, The Royal Opera © Rob Moore

The British composer wrote two major operas, Gawain and The Minotaur, for The Royal Opera

The Royal Opera is saddened to hear of the death of the British composer Harrison Birtwistle, who passed away on 18 April aged 87.

Harrison Birtwistle grew up in Accrington, and studied clarinet and composition at the Royal Manchester College of Music. He began his career as a clarinettist and wrote his early compositions while working as a music teacher in Dorset. In 1965 his ensemble piece Tragoedia was given an acclaimed premiere at the Wardour Castle Summer School. In 1966 he won a Harkness Fellowship to study in the USA and became a Visiting Fellow at Princeton University, where he completed his first opera, the ground-breaking chamber work, Punch and Judy. The opera was given its world premiere in 1968 at the Aldeburgh Festival, where its violent storyline shocked and gripped audiences in equal measure, and was accompanied by a score rich in the innate theatricality and bold artistic experimentation that were to become the hallmarks of his style. From 1975 to 1983 Birtwistle was Music Director at the National Theatre, where he wrote the music for Peter Hall’s production of Aeschylus’ Oresteia. His first full-scale opera, The Mask of Orpheus, was given its world premiere in 1986 by English National Opera, and won the 1987 Evening Standard Award for Opera. Its most recent staging took place in 2019, in an Olivier Award-nominated production, directed by Daniel Kramer at English National Opera.

Birtwistle’s first commission for Covent Garden was the opera Gawain, to a libretto by his regular collaborator David Harsent. Gawain had its premiere in 1991, and won the Evening Standard Award for Opera. It was recorded, revived (in a revised version) in 1994 and 2000, and has since been performed at the Barbican and the Salzburg Festival. Birtwistle’s second Covent Garden commission The Minotaur – also a collaboration with Harsent – had its world premiere in 2008, conducted by The Royal Opera’s Music Director Antonio Pappano,and featuring a cast including Philip Langridge, Johan Reuter, Christine Rice, John Tomlinson and Andrew Watts. The reception from the press was enthusiastic: the Guardian described the score as ‘spare and elegant’ and the vocal lines as ‘made to seem the most naturally expressive things in the world’, while the Telegraph singled out for particular praise the orchestral interludes: ‘landscapes and seascapes of exquisitely lucid colour and finely calibrated harmony’. The opera was revived in 2013. In 2015 The Royal Opera performed Birtwistle’s Greek myth double-bill The Cure/The Corridor in a co-production with Aldeburgh Festival with support from the London Sinfonietta.

Birtwistle’s vast output also included the chamber operas Yan Tan Tethera, Down By the Greenwood Side (performed at the Royal Opera House in 2008) and The Io Passion, the full-length operas The Second Mrs Kong (for Glyndebourne) and The Last Supper (for Berlin State Opera), the orchestral works The Triumph of Time, Earth Dances and Panic, the ensemble pieces Secret Theatre and Theseus Game, works for string quartet including Tree of Strings, concertos for piano and for violin, and the cantata Angel Fighter. His works were recorded by record labels including NMC, EMI, Opus Arte, Decca, Black Box and Metronome. From 1994 to 2001 he was Henry Purcell Professor of Composition at King’s College, London. He received a knighthood in 1988 and was made a Companion of Honour in 2001.

Oliver Mears, Director of The Royal Opera, said ‘Harrison Birtwistle was a giant of contemporary composition, and especially of opera. His uniquely personal approach to the art form, grounded in myth but always uncompromisingly modern in its musical language, generated works of exceptional power. At the Royal Opera House, he will be remembered especially for his full-length dramas Gawain and of course his deservedly popular Minotaur. We will miss him hugely.’