Making William Chappell’s 1980 designs appeal to both contemporary audiences and dancers calls for a huge amount of research and innovation. 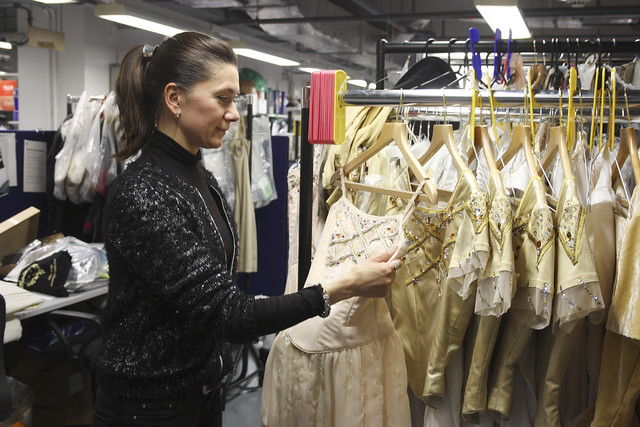 Natalia Stewart with her costumes for Rhapsody, after William Chappell © 2016 ROH. Photograph by Alex Laffer

Frederick Ashton’s Rhapsody has had two design overhauls since its premiere in 1980. For the current revival, The Royal Ballet is returning to the original designs for the first time. But it’s not a process of simply digging the costumes out from the back of the wardrobe, as costume designer Natalia Stewart explains.

After a dance career with the Bolshoi, Natalia went on to study design and worked in the West End – but her heart was always in ballet. She has now worked for the Royal Opera House’s Costume Department for more than fifteen years, as well as designing for Royal New Zealand Ballet and Royal Danish Ballet. She loves the environment at the Royal Opera House: ‘There are so many amazing people here. You always learn more, bit by bit, of everything – of different styles, of different techniques, of different ideas. It’s the best place to be.’

To re-create William Chappell’s 1980 costume designs, Natalia began her research in the extensive Royal Opera House Collections. She found ‘so many interesting things – articles, pictures – but unfortunately nothing in colour’. Luckily, she was able to view one of Chappell’s original costumes, stored at the new Bob and Tamar Manoukian Costume Centre in Thurrock. Natalia used this as a starting point: ‘we took the colours, the ideas, the style.’

Natalia Stewart with her costumes for Rhapsody, after William Chappell © 2016 ROH. Photograph by Alex Laffer

Strangely, in Chappell’s original designs ‘everything was in blue and green’ rather than the pink and gold of the finished costumes. Natalia has a theory that they changed the colours quite late:

‘As the premiere was for The Queen Mother’s birthday it had to be quite spectacular – gold, glitter, everything! It was a 1980s style, with colours that were in fashion at the time. For the modern eye perhaps it would be too much. Instead, we thought we’d keep the idea, the mood – more an impression of what Chappell wanted to do’. For example, ‘The boy in gold is the same as Baryshnikov [creator of the lead male role] was in 1980, but it’s a slightly toned-down gold, with slightly different lines that are more pleasant to the modern eye. I think that is important – you still see it as an “old piece”, but it’s right for how we see today’.

Ashton created the set designs for his original production, and they feed in both to Chappell’s designs and Natalia’s re-creations: ‘the bottom of the tunics and bodices mirror the main lines of the set’. However, she has simplified and unified the decoration, using just one pattern from the set as a repeating motif, rather than the multiple patterns seen in Chappell’s designs – another innovation to make Chappell’s vision work for a new audience.

After her research, Natalia produced designs and drawings for the costume makers:

‘There were only a few of Chappell’s original designs, and they had no descriptions of how to put the costumes together. Because we were changing the decoration and style slightly, we had to have technical drawings. The makers can then produce a prototype, and we have a fitting with the dancers to finalize the shape – to see what would and wouldn’t work. I ended up doing the prototype for the decoration myself, gluing the stones over Christmas. This went to the makers, who secured every single stone with stitches. It’s very time consuming, but it looks good.’

New fabrics and technologies have also improved the costumes for the dancers:

‘For example, the boys’ costumes in the original are made out of heavy velvet, with heavy backing material. Nowadays, the dancers would feel terribly uncomfortable, as the choreography is very difficult. We found a very light velvet and a very light backing that stretches, so we have a few very happy dancers!’

Natalia’s work on Rhapsody highlights the care and attention necessary when producing The Royal Ballet’s heritage works. It’s a painstaking process that brings together research into the work’s performance history with innovation in production techniques. The Royal Ballet is committed to presenting important works such as Rhapsody to contemporary audiences – and so preserving them for future generations.

The production will be broadcast live to cinemas around the world with The Two Pigeons on 26 January 2016. Find your nearest cinema and sign up to our mailing list.

The production is given with generous philanthropic support from Lindsay and Sarah Tomlinson.