How Rossini’s foregrounding of the people radically changed the balance of drama in the opera. 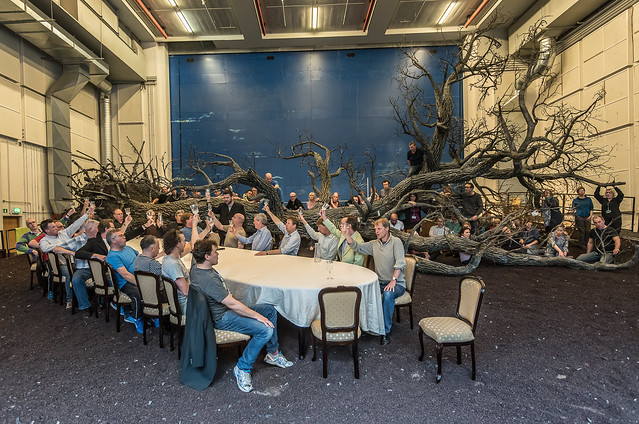 Traditionally at Rossini’s time, the chorus was expected to take part only in self-contained numbers, and to stand still in blocks on the stage. But already in Le Siège de Corinthe – Rossini’s 1826 adaptation of Maometto II for Paris – the chorus engaged in dialogue with their leader, in dramatic recitative. In Guillaume Tell different factions of an expanded chorus – Austrian soldiers, Swiss villagers (men, women, children) – become active partners in the drama, singing more demanding vocal lines and moving about the stage with purpose. The Rütli oath scene in Act II is a good example of this. One witness to the first performance suggested the chorus were tripping over their words and lacked ensemble, some too terrified to sing and unsure where to move – but they clearly improved as the performances went on. Rossini’s expansion of choral passages (at the expense of solo numbers) caused Berlioz to complain about the resulting aural monotony, but it meant that the people became a decisive character in the drama, and a new kind of politically charged relationship between people and protagonists – hinted at in Le Siège – was established.

During Guillaume Tell’s opening scenes, the main protagonists are presented as members of the crowd, illuminated only briefly. As the opera unfolds, they gradually emerge as the people’s representatives. The crowd magnifies the dilemmas of the individual, the individual brings the public conflict into focus. Director Damiano Michieletto has promoted this organic relationship by planting actors among the chorus. They have been attending the soloists’ rehearsals as figures with whom the characters can interact physically. In Act I, for example, the actors manhandle the (drunk) fisherman Ruodi during his solo, and when Leuthold appears after killing a soldier, they help him and defend him from the Austrian soldiers who arrive shortly afterwards. In a later rehearsal, when the whole chorus is present for these scenes, these actors melt into the crowd, but they help to sustain visually the natural and organic relationship between the protagonists and the people.

In addition, Damiano treats the chorus like the soloists: he explains their motivation during a particular scene, their feelings about the other characters and the larger political situation, and how these might translate into their movements as individuals. He encourages a blend of planned and instinctive movement: simple, strong, directed gestures are favoured to preserve visual clarity, but realism is also important. With so many people on stage at one time, consideration needs to be given as to how best to guide the audience’s attention. At one level the chorus are surrogate spectators for the audience, giving us cues where to look and how to react, and so their movements need to be ordered. At another level they are part of the overall stage picture, which is often intended to look chaotic. In the Act III finale, when Tell is condemned to the island fortress across the lake after shooting the apple from Jemmy’s head, the Swiss and Austrian sections of the chorus are set against each other, and the soloists arranged across the front of the stage in relation to their chorus compatriots, conveying the complexity and tension of the drama at a glance, against a thrilling burst of vocal power from all sides.

As I suggested in a recent post, Parisian audiences may well have identified with the Swiss villagers in Tell, having recently suffered the humiliation of (brief) foreign occupation following Napoleon’s defeat at Waterloo – and harbouring noble feelings about justice and freedom. But to what extent does the success of Tell depend on audience identification with the people? Can a modern audience empathise with such generalised feelings? Does the situation need to be updated to a more recent political event? Perhaps the establishment of an organic relationship between soloists and chorus means that it simply works on its own terms as a human drama.

Ultimately, Rossini’s radical approach was not followed through by other composers. Yes, the chorus becomes a crucial character in later operas – the Scottish refugees in Verdi’s Macbeth are clear descendants. But even in later grand operas, singers – and audiences – demanded that the musical focus return to the soloists.