Cio-Cio-San’s much-loved aria is a perfect and painful encapsulation of the tragedy at the opera’s heart. 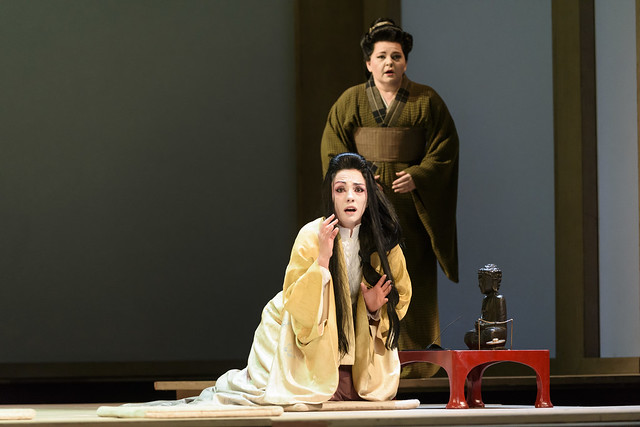 ‘Un bel dì vedremo’ (One fine day) is an aria from Giacomo Puccini’s 1904 opera Madama Butterfly, sung by the title character, Cio-Cio-San. It has become one of the best-known movements from the opera, with audiences entranced not only by its beautiful melody but also by its heartbreaking encapsulation of the tragedy at the opera’s heart.

Where and when does it take place?

‘Un bel dì vedremo’ takes place in Act II of Madama Butterfly. In the first act, the 15-year-old Japanese geisha Cio-Cio-San marries the American naval officer Lieutenant Pinkerton while he visits Nagasaki. Pinkerton views their marriage as just a way to have a good time, but for Cio-Cio-San it is a deeply serious act – so much so that she converts to Christianity, offending her family who disown her. By ‘Un bel dì vedremo’, three years have passed since the wedding. Pinkerton left shortly after the marriage and has not returned. Cio-Cio-San lives in his house with their young son, and her maid Suzuki. Their money is running out and everyone urges Cio-Cio-San to forget Pinkerton and make a new marriage. But she firmly believes that he will return, and in ‘Un bel dì vedremo’ imagines that happy day. Meanwhile, Suzuki weeps.

What do the words mean?

In this wonderful aria Puccini exploits music’s power to represent several different mental states at once: he vividly depicts Cio-Cio-San’s strength, while also telling us with heartbreaking certainty of her inevitable tragedy. Cio-Cio-San sounds vulnerable in her opening phrase, but it demands great vocal control from the soprano. The opening melody’s rhythmic simplicity and its shimmering orchestral accompaniment create the sense of a lovingly savoured dream – although one tinged with melancholy in the predominantly minor harmony. This theme returns with appalling power at two later points in the aria: first as Cio-Cio-San sings the word ‘morir’ (die), accompanied by the full orchestra playing ‘tutta forza’ (with all force). Almost before we can recover it returns again, again fortissimo, Cio-Cio-San this time rising to her highest note in the aria on the word ‘aspetto’ (I wait). The orchestra’s strong close firmly evokes Cio-Cio-San’s certain hope – while twisting the knife in our hearts.

Where to start? Madama Butterfly is one of the most famous works in the opera canon, for good reason. Puccini returns to numerous melodies throughout the opera, giving the work both musical unity and dramatic inevitability; for example, the primary melody from ‘Un bel dì vedremo’ returns with powerful force when Butterfly sees Pinkerton’s ship sail into Nagasaki harbour. The famous Humming Chorus that follows shortly after is a remarkable, wordless evocation of Cio-Cio-San’s invincible patience as she waits, futilely, for Pinkerton to come to her. Their great Act I duet ‘Viene la sera’ (Night is falling), as well as being one of Puccini’s longest and most beautifully written, is crucial in establishing the basis of Butterfly’s love. Equally important is her relationship with her family, terrifyingly captured in the wedding ceremony, with music drawing on authentic Japanese melodies.

Over the past decades there has been no shortage of great sopranos who bring their voices and their souls to this role, finding different ways to interpret Butterfly’s vulnerability and strength. Classic recordings include Victoria de los Angeles’s at the Royal Opera House with Rudolf Kempe in 1957; Renata Scotto’s with John Barbirolli in 1966; or Renata Tebaldi’s with Tullio Serafin in 1958. Mirella Freni appears on two iconic recordings, with Luciano Pavarotti and Herbert von Karajan in 1974, and in the famous filmed version from the same year, again with Karajan and this time opposite Plácido Domingo. Of recent years the most famous audio recording must be Angela Gheorghiu’s with Jonas Kaufmann and Antonio Pappano from 2009. The many DVD recordings include Anthony Minghella’s wonderful production for English National Opera, filmed at the Metropolitan Opera, New York, in 2009 with Patricia Racette and Patrick Summers.

Cio-Cio-San is perhaps the primary example of the noble, self-sacrificing heroine who is such a familiar figure in opera’s history. There are several in the Puccini canon, who all have wonderful key arias: Mimì from La bohème with ‘Mi chiamano Mimì’; the fiery Tosca and her ‘Vissi d’arte’; Suor Angelica’s ‘Senza mamma’; Liù from Turandot with ‘Tu che di gel sei cinta’. It’s a thread that runs through 19th-century Italian opera, with just a handful of the many wonderful roles including Verdi’s Violetta from La traviata and Gilda from Rigoletto, Bellini’s Norma, Donizetti’s Lucia di Lammermoor and Rossini’s Elena from La donna del lago. But Butterfly is very much a work from the turn of the 20th century, with the near contemporaneous Pelléas et Mélisande by Debussy in many ways a close cousin, particularly in its use of harmony.

Madama Butterfly runs until 25 April 2017. Tickets are sold out, but 49 tickets for each performance will be released the week before as part of Friday Rush.

The production is broadcast live to cinemas around the world on 30 March 2017. Find your nearest cinema.

The production is a co-production with Gran Teatre del Liceu, Barcelona, and is given with generous philanthropic support from Mrs Susan A. Olde OBE, Aud Jebsen, Spindrift Al Swaidi and The Maestro’s Circle.