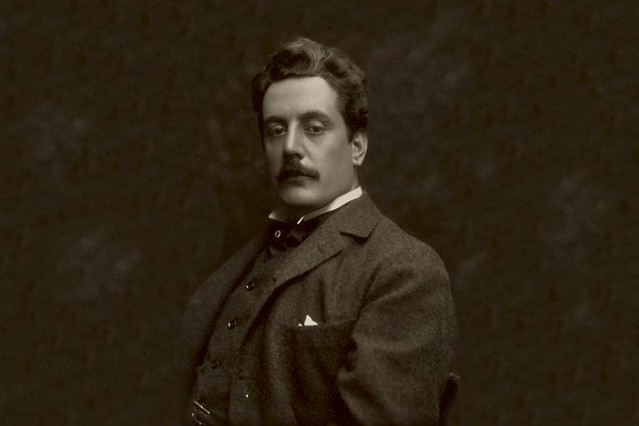 Giacomo Puccini (1858–1924) is arguably the world’s most popular opera composer – but it took several years for him to establish himself. Puccini was drawn to opera from his adolescence and began his first opera, Le villi, on his graduation from Milan Conservatory. Puccini’s score demonstrates many of the skills that led him to become Italy’s greatest 20th-century opera composer, including melodic originality, a wonderful dramatic instinct and rich orchestration; though the opera suffers from a somewhat stilted libretto. Puccini wrote Le villi for the Sonzogno Competition – it didn’t win, but its first public performance led Verdi’s publisher, Giulio Ricordi, to take Puccini on. Unfortunately, Puccini had much less success with his second opera, the melodramatic four-act opera Edgar (1889).

Puccini’s third opera Manon Lescaut – the first where he selected the subject himself– was his first masterpiece. Puccini ingeniously adapted symphonic structures to the flow of the drama, but never compromised melodic beauty. Manon Lescaut demonstrates Puccini’s skill as a creator of memorable characters, particularly the heroine (the first in a line of complex, sympathetic and doomed women in Puccini operas). The opera had a difficult gestation, but its premiere on 1 February 1893 in the Teatro Regio, Turin, was a great triumph.

In 1893 Puccini began a fruitful collaboration with the librettists Giuseppe Giacosa (also a poet and playwright) and Luigi Illica, with whom he wrote La bohème (1896), Tosca (1900) and Madama Butterfly (1904). La bohème is set in 1830s Paris and tells the story of a group of penniless artists and their girlfriends. Puccini brought both the opera’s central love story and mid-19th-century Paris to life, with brilliantly varied orchestration, rapid shifts from comedy to tragedy, lyrical melodies and a moving use of reminiscence motifs. Although La bohème had a mixed reception at its premiere, it soon became one of the world’s most popular operas, and is currently the most performed opera at the Royal Opera House.

In contrast to Bohème’s delicate lyricism, Tosca is a fast-paced drama containing torture, murder and suicide. The music for Baron Scarpia, Puccini’s great operatic villain (introduced in the opening notes of the opera) is dark and terrifying – but Puccini also wrote passages of great melodic beauty for the lovers Cavaradossi and Tosca. Tosca’s daring harmonic language and subject matter have led it to be often hailed as ‘the first modern opera’.

For Madama Butterfly, Puccini moved to the exotic setting of Japan, telling the story of an idealistic Japanese geisha who marries and is abandoned by an American naval officer. He showed great tenderness in his depiction of Cio-Cio-San (Butterfly), one of his greatest creations. Puccini studied traditional Japanese music while composing the opera in order to create a vivid sense of place. Although Madama Butterfly had an unsuccessful premiere and Puccini revised the score several times, it soon became nearly as popular as La bohème and Tosca, and is among the ten most-performed operas in the world. 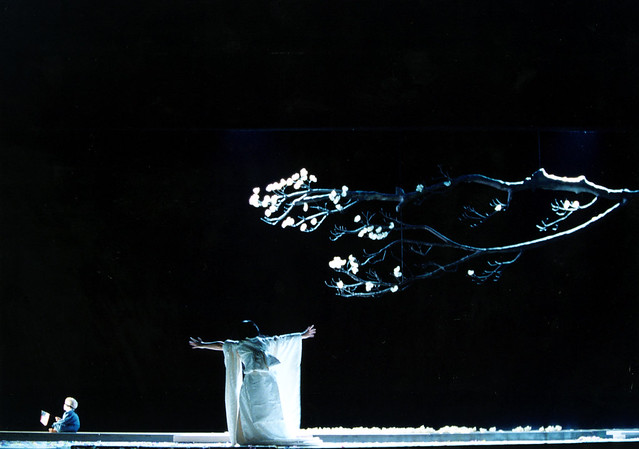 Following the death of Giacosa, Puccini’s productivity slowed as he struggled to find new librettists and subjects. He eventually found inspiration with La fanciulla del West (1910), set in California at the time of the Gold Rush. Fanciulla is one of Puccini’s most musically complex and symphonic works – although there is much melodic beauty there are very few arias as such, and the orchestra always plays a key role in the action. Again, Puccini creates an effective sense of place in each act, from the bustle of the saloon bar in Act I to the misty dawn in the Californian forest in Act III. 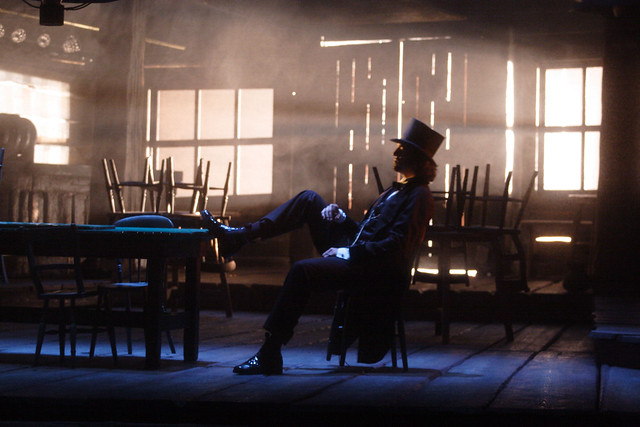 In contrast to the epic scale of La fanciulla del West, Puccini’s next opera, La rondine (1917), has a romantic and ironic plot. Puccini’s gifts as a melodist come to the fore in this opera, and he also makes playful use of various dance forms, including the waltz, the tango and the foxtrot. The opera had a difficult genesis: it was originally intended to have its premiere in Vienna, but World War I made this impossible as Italy and Austria were on opposite sides. La rondine was eventually staged in Monte Carlo in 1917. The opera’s delicately understated plot, and a general feeling in Italy that Puccini had been unpatriotic during World War I (which turned some of his countrymen against him) led to La rondine having a mixed reception:  it was many years before it gained a permanent place in the repertory. 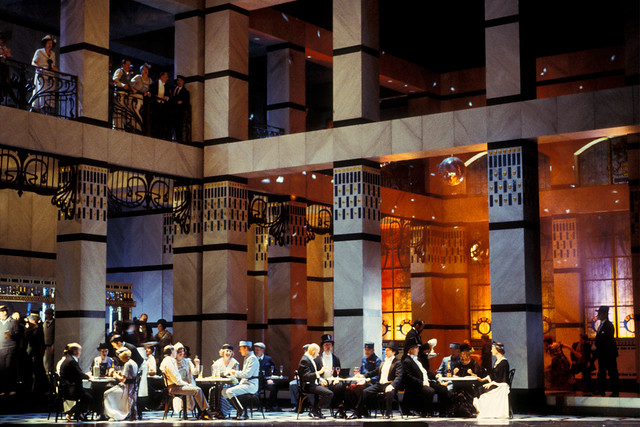 While he completed La rondine, Puccini was already working on his next, ambitious project. Il trittico (1918) consists of three one-act operas: a melodrama set on a barge on the Seine in early 20th-century Paris; the tragic story of a nun mourning the loss of her child; and a sparkling comedy about a clever trickster and a greedy Florentine family. In Il tabarro Puccini evokes the world of working class Paris, from the opening dreamy evocation of the Seine at evening to the use of popular song and the savagery of the final scene. In Suor Angelica each of the principal nuns (and the cruel Princess) have distinct personalities, and Puccini writes exquisite melodies for Suor Angelica, particularly in her lament ‘Senza mamma’. Gianni Schicchi is Puccini’s only large-scale comedy and is brilliantly successful – particularly in the composer’s musical contrasting of the grasping Donati family, the cunning Schicchi and the ardent lovers Rinuccio and Lauretta, and in his witty orchestration. 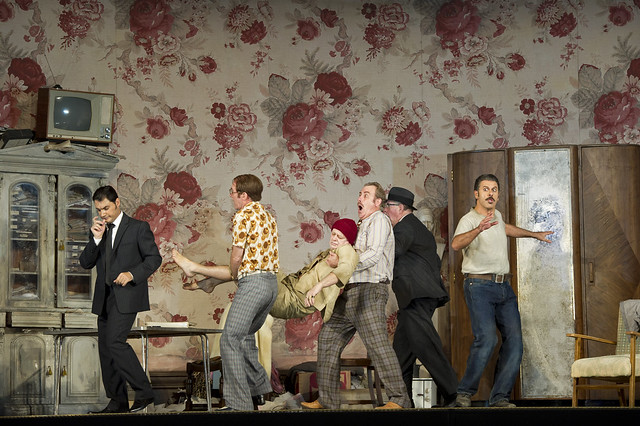 Puccini’s fascination with the exotic emerges again in his final work, Turandot. In his score Puccini made use of several Chinese melodies (some acquired via a musical box); the opera also contains some of his most original orchestration and harmonic language, and sees Puccini making greater and more innovative use of the chorus than in his previous operas. This, coupled with the opera’s fairytale plot in which a resolute hero teaches a savage ‘ice princess’ how to love, makes Turandot one of Puccini’s most ambitious creations, and it is certainly his most organic integration of music and drama. When Puccini died he left the opera without a completed final scene for Act III.  The world premiere, two years after the composer’s death, presented the work as Puccini left it. But a younger composer, Franco Alfano had been authorized to complete an ending from Puccini’s sketches and it quickly became standard in performances. Today, Turandot is one of the most admired of Puccini’s operas. 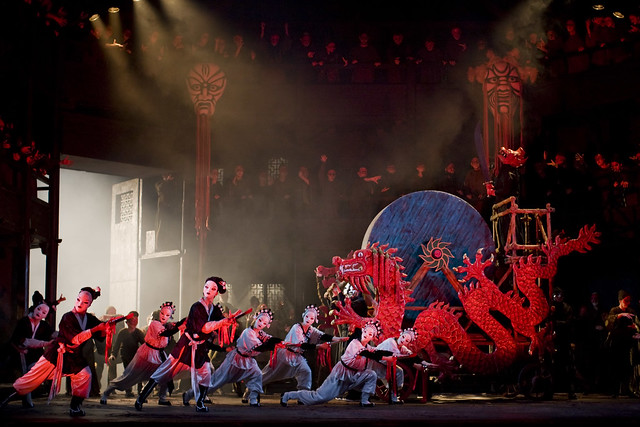 With memorable characters, gripping plots, distinctive and atmospheric orchestration and wonderful melodies, it’s easy to see why Puccini’s operas are among the most beloved in the repertory.