Peter Hall: A look back at the director's highlights with The Royal Opera 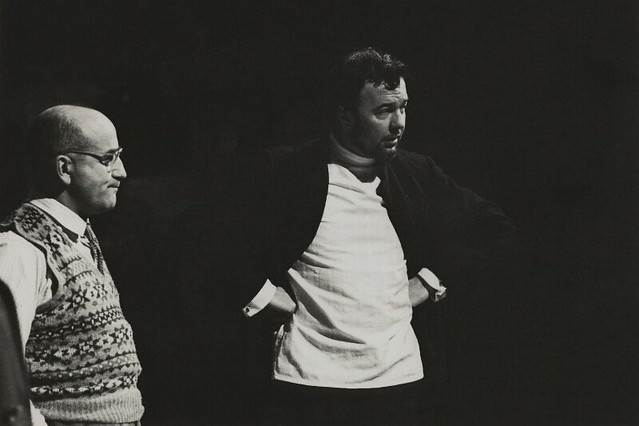 Sir Peter Hall (1930–2017), founder of the Royal Shakespeare Company and former director of the National Theatre and Glyndebourne, had a long and rich relationship with The Royal Opera.

Hall made his Royal Opera House debut in 1965 with the UK premiere of Schoenberg's masterful Moses und Aron, in collaboration with Music Director Georg Solti. Hall's production was a spectacular undertaking, incorporating a huge cast, an onstage camel and four semi-naked dancers. The result was a great success, as was its revival the following year. 1966 also saw Hall's new production of The Magic Flute, sung in English and conducted by Solti, for which Hall carefully re-created the original 1791 stage directions.

1971 saw two great productions. Eugene Onegin, conducted by Solti and with elegant sets by Julia Trevelyan Oman, became a popular favourite with The Royal Opera's audiences. Hall and Solti were again united for a majestic production of Tristan und Isolde, with which Solti marked the end of his tenure as Music Director of The Royal Opera in a run of performances starring Birgit Nilsson as Isolde. Hall's production remained in the repertory for a decade after its premiere, and was graced over the years by singers such as Gwyneth Jones, Berit Lindholm and Jon Vickers.

Hall's 1988 production of Salome for The Royal Opera, conducted by Christoph von Dohnányi, starred Hall's then wife, Maria Ewing. His final work for The Royal Opera came the following year in 1989 with Albert Herring, a transfer from his hugely popular 1985 production for Glyndebourne, where Hall was Artistic Director 1984–90.

‘I am very sorry to hear the news of Sir Peter’s passing. His profound impact on the theatrical tradition of this country and beyond is still felt today, and the world of opera is forever enriched by his many important contributions. Sir Peter brought to his opera direction not only an immense understanding of stagecraft but a deep appreciation of the music, and I am certain his legacy will continue to be celebrated by artists and audiences alike.’