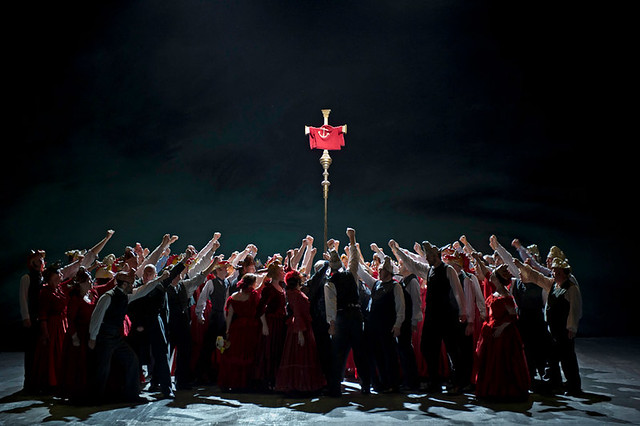 Peter Grimes is inspired by George Crabbe’s 1810 series of poems ‘The Borough’ set in Britten’s native county of Suffolk, on the east coast of England. Britten and his partner, the British tenor Peter Pears, worked on the scenario for the opera together, transforming Crabbe’s monstrous fisherman into a fundamentally sympathetic outsider, persecuted by a hostile community. Britten then asked the Communist writer Montagu Slater to write the libretto, who added many individual touches to the text. The opera was first performed in 1945, just after V.E. Day, with Pears in the title role.

Peter Grimes is a fisherman, living in a small Suffolk town. He is summoned to court after the death of his young apprentice at sea; the townspeople are convinced Grimes is to blame, but he is let off with a caution and warned not to take another apprentice. Ignoring the court’s ruling, Grimes soon recruits a new lad from the workhouse. Some time later the boy falls to his death; the townspeople gather to hunt Grimes down, despite desperate pleas for mercy from the schoolmistress Ellen Orford. Grimes descends into madness. The old sea captain Balstrode tells him to sail his ship out to sea and drown himself.

Peter Grimes: A fisherman and a solitary figure, who finds it impossible to integrate with the society about him.
Ellen Orford: A widowed schoolmistress who cares for Peter.
Captain Balstrode: A retired sea captain.
Mrs Sedley: The town gossip.
Ned Keene: An apothecary, who sources things for the inhabitants of the Borough, including Grimes’s apprentices.
Auntie: Landlady of the Boar Inn.
Auntie’s Nieces: Two young girls who work as prostitutes at the Boar Inn.

Soprano Amanda Roocroft, on location in Aldeburgh on the Suffolk coast, discusses the role of Ellen Orford.