The designer worked extensively with The Royal Ballet throughout his career. 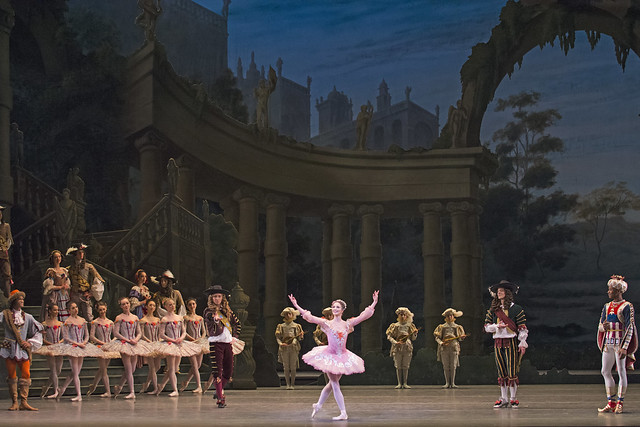 Peter Farmer, a painter and leading figure in British theatre design, has died.

Farmer worked extensively in ballet, both with The Royal Ballet and Birmingham Royal Ballet, as well as other major international ballet companies.

He collaborated closely with Peter Wright, and made a considerable contribution to the repertory of BRB under Wright’s directorship, his design credits with the company including Giselle, The Dream, Paquita, Theme and Variations, Dorian Gray, Les Sylphides, Coppélia and Birthday Offering. Wright has written how he brought ‘a wonderful sense of atmosphere to his sets – a real world on stage’.

It was with Wright that Farmer began his career with The Royal Ballet, designing his 1971 production of Giselle. The opening night starred Antoinette Sibley in the title role with Anthony Dowell as Albrecht and Deanne Bergsma as Myrtha.

He returned to the Royal Opera House two years later in 1973, to design sets and costumes for the first Royal Ballet production of Kenneth MacMillan’s The Sleeping Beauty, originally created for Berlin Opera Ballet. Farmer was brought into the project late in the proceedings but produced lavish sets and magnificent costumes, again for Sibley, Dowell and Bergsma in the lead roles.

Farmer returned to The Royal Ballet in 1980 to design Robert North’s Troy Game – a comic, bravura work for ten men. His next credit with the Company was in 1991, when he produced suitably elegiac sets and costumes for MacMillan’s Winter Dreams. He designed a dimly lit frontispiece gauze of twigs through which the family is seen in the background, concentrating attention on the action and the two stars, Darcey Bussell and Irek Mukhamedov.

For the Frederick Ashton centenary in 2004 Farmer was invited to redesign the Act II sets for Sylvia, where he brought a dramatic clarity to Robin Ironside’s famous original designs. The work set him in good stead for arguably his most important contribution to The Royal Ballet – realizing Oliver Messel’s iconic designs for the Company’s 1946 production of The Sleeping Beauty, brought back to the stage in 2006 by Monica Mason and Christopher Newton.

Farmer captured the original fantasy element of the Messel designs and, with some subtle additions of his own, brought to life a treasured production. He spoke of how ‘The original designs were on a grand scale, which reflected the glory of the Tchaikovsky score. I did not want to do a museum creation but kept much of the original, and added costume designs in my own style.’

On its premiere in 2006 the new production was greeted with acclaim, including for what The Guardian praised as ‘the more fluidly modern style of Peter Farmer’s reworked designs’. The production has been regularly revived, with The Sunday Times admiring the ‘meticulously re-created [palace scenes] from Oliver Messel’s original archive… what a spectacular difference it makes’.

Less than a month after the premiere of The Sleeping Beauty in 2006 there came the premiere of Homage to The Queen, a showpiece ballet to celebrate Her Majesty’s 80th birthday. He designed colourful and eye-catching costumes that suited the occasion admirably. His final credit with The Royal Ballet was in 2007, with the Company’s first production of George Balanchine’s Theme and Variations.

Farmer was a painter and designer of much imagination, with a keen understanding of how to balance grand stage designs for the entire corps and more intimate scenes for the leads. His sets and costumes allowed dancers great freedom of movement, and elegantly showed off the choreography.

Kevin O’Hare, Director of The Royal Ballet, paid tribute with the following words: ‘It is with great sadness that we heard of Peter Farmer's passing. Peter had a close relationship with the Royal Ballet companies over many years and distinguished many productions with his brilliant designs. His artistry, theatricality and wonderful humour will be missed by us all.’

The Royal Ballet’s performance of The Sleeping Beauty on 3 January 2017 is dedicated to the memory of Peter Farmer.

This article has been categorised Ballet and tagged by Marius Petipa, obituary, Peter Farmer, Production, The Sleeping Beauty