In preparation for English Touring Opera's production of King Priam, we look at how pacifist ideals have influenced opera in the last century. 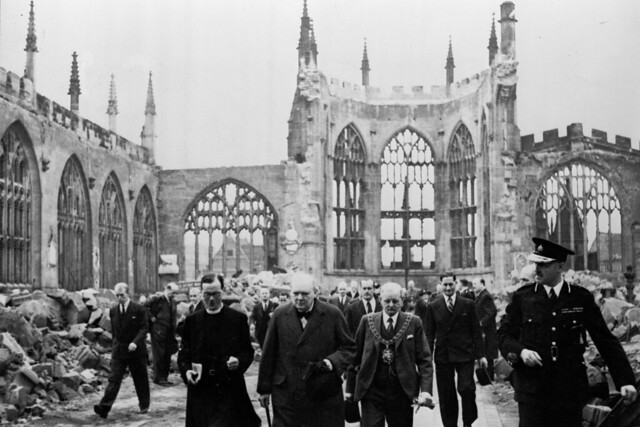 Prime Minister Winston Churchill walks with a guard and members of the Anglican clergy through the ruins of Coventry Cathedral. Official war photograph for the British government, 28 September 1941 by War Office official photographer Captain Horton

Operas have long expressed criticism of war and conflict. The hero of Mozart’s La clemenza di Tito (1791) is determined to avoid tyranny at all cost. Verdi gives the title character in Simon Boccanegra (1857, rev. 1881) an ardent plea for peace, while Aida (1871) negatively portrays the Egyptians as brutal warmongers in contrast to the peaceful Ethiopians. Richard Strauss’s Friedenstag (1938) had such a clear anti-war message that the Nazis banned it, while Prokofiev explored the misery of the Napoleonic Wars in War and Peace (1943). Following the horrors of World War II, opera increasingly became a way in which composers – including the dedicated pacifists Tippett and Britten – could explore their political and moral convictions.

In King Priam (1962) Tippett uses the story of the Trojan War to explore the far-reaching effects of personal decisions. All the choices made in the first act of the opera – such as Priam abandoning his baby son Paris and years later bringing him home again, and Paris eloping with Helen – have tragic consequences. But could there ever have been a ‘right choice’? In a significant departure from Ancient Greek myth Tippett downplays the role of the gods – his human characters are independent, and their decisions their own.

In another contrast to his main source the Iliad, Tippett focuses on the trauma of war away from the battlefield, particularly on the sufferings of the ageing King Priam. Act II depicts the brutality of war through a gruesome, harshly-scored trio in which Priam, Hector and Paris gloat over the supposed death of Achilles. Act III movingly explores the terror of the Trojan women as their men fall in battle, and Priam’s grief as he begs Achilles for the body of his son Hector. The final scene, as Priam resigns himself to death, drives home the futility of war.

Britten was as firm a pacifist as Tippett, and wrote several openly anti-war works. Arguably his most famous is the War Requiem (written like King Priam for the consecration of Coventry Cathedral in 1962), which makes poignant use of the poetry of Wilfred Owen, interwoven with the Latin Requiem Mass. Criticism of war also features in several of Britten’s operas, most explicitly Owen Wingrave (a television opera first broadcast in 1971 and first performed onstage in 1974). Owen is expected to follow family tradition and join the army, but rejects a military career, and tells his grandfather General Sir Philip that he would make war a criminal offence. The harsh military music associated with the older Wingraves contrasts with Owen’s ardent defence of pacifism – culminating in his radiant Act II Peace Aria, where he declares ‘in peace I have found my image, I have found myself’. But Owen is denied a happy end when the ghosts of his ancestors take their revenge on him.

Britten and Tippett have not been the only composers to take an anti-war stance. Henze’s pacifism is reflected in his operas Der Prinz von Homburg (1958, about a prince who prefers love to his military duties), The English Cat (1980–83, a humorous work about a group of pacifist cats) and his re-workings of Greek tragedies in The Bassarids (1964–5) and Phaedra (2007). Philip Glass’s hugely popular Satyagraha (1979) explores Gandhi’s concept of non-violent resistance to injustice, while his Appomattox (2007) depicts the horrendous brutality of the American Civil War. Mark-Anthony Turnage turned to Sean O’Casey’s fiercely pacifist play on the tragedy of World War I for The Silver Tassie (2000). And John Adams has explored totalitarianism in Nixon in China (1987), terrorism in The Death of Klinghoffer (1991) and the horrors of nuclear warfare in Doctor Atomic (2005). In our politically volatile times, the message of non-violence in operas seems ever more relevant.