From a haunted country house to a gruesome severed head, a look at the spookiest moments in opera. 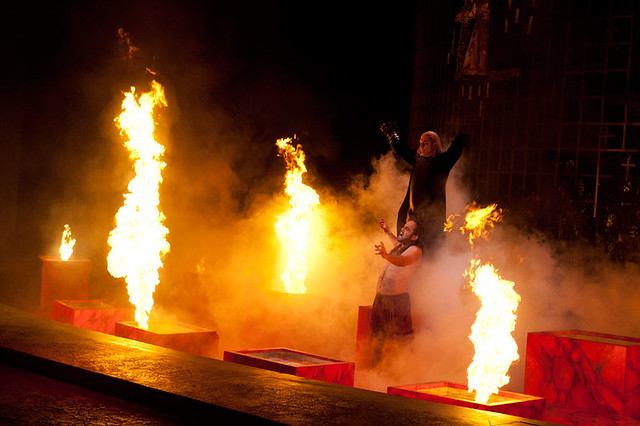 With Halloween happening this week, we asked our social media following for their favourite spooky operas. Here are five that were chosen for their spine-tingling atmosphere:

The Turn of the Screw
Based on the Henry James novella of the same name, Benjamin Britten’s The Turn of the Screw is the classic operatic ghost story. An unnamed Governess moves to a country house to take care of two children, only to discover supernatural goings on, and hints of past abuse. As she gets to know the children better, she becomes increasingly convinced that they are suffering some form of demonic possession. Britten leaves it to us to decide whether or not the ghostly happenings at Bly House are in fact all in the mind of the Governess, as the tension builds to a chilling and tragic final scene.

Don Giovanni
The final day of opera’s lascivious anti-hero begins with a cold-blooded murder and goes downhill from there.  The sharp shock of one of opera's most famous overtures plunges the audience into the piece and Don Giovanni's hastening towards damnation, pursued by those he has wronged, until, late in the evening when he is visited by a ghostly dinner guest.  It might have some moments of musical beauty (the aria 'Batti batti bel Masetto' for example) but Don Giovanni remains a work bookended by some of Mozart's most dark and dramatic music.

Salome
The passionate Dance of the Seven Veils is the most famous part of Strauss’s Salome. For fans of the macabre, however, it’s the unveiling of the severed head of John the Baptist that steals the show. As the deranged Salome embraces the head and crawls about the stage with it in David McVicar’s Royal Opera production, the blood soaks her dress and skin. Her passionate kissing of the head shocks Herod and his guests so profoundly that the Tetrarch (hardly a figure of virtue himself) orders Salome’s execution. This final scene is harrowing – but also deeply moving, as McVicar encourages us to feel sympathy for this troubled heroine.

Macbeth
With witches and ghosts aplenty, no Halloween opera list would be complete without Macbeth, Verdi’s first Shakespearian opera. Verdi adored Shakespeare’s plays, and his score faithfully reproduces the frenzied emotions of the Bard’s original drama. As ambition transforms Macbeth to a murderous tyrant hell-bent on retaining power, Lady Macbeth, who first stirred his ambition, descends into insanity. With the unexpected appearance of the ghost of Banquo, and a hallucinatory vision conjured up by the Witches of Banquo’s ghostly descendants, this is certainly an opera to send shivers down your spine.

Elektra
King Agamemnon of Mycenae has been murdered by his wife Klytämnestra and her consort, Aegisth. Agamemnon’s daughter Elektra becomes obsessed to the point of insanity with avenging her father’s death. She gets her desire when her brother Orest returns to Mycenae, and Klytämnestra, Aegisth and their followers are killed in one of opera’s most terrifying bloodbaths. But what follows is even more chilling, as the exultant Elektra literally dances herself to death. Strauss’s score depicts every shade of his characters’ tormented emotions, and the grim force of destiny, not least in the monumental ‘Agamemnon’ motif that opens and closes the opera.

What do you think is the scariest opera in the repertory?

This article has been categorised Opera and tagged don giovanni, Elektra, Halloween, horror, Salome, scary, spooky, The Turn of the Screw