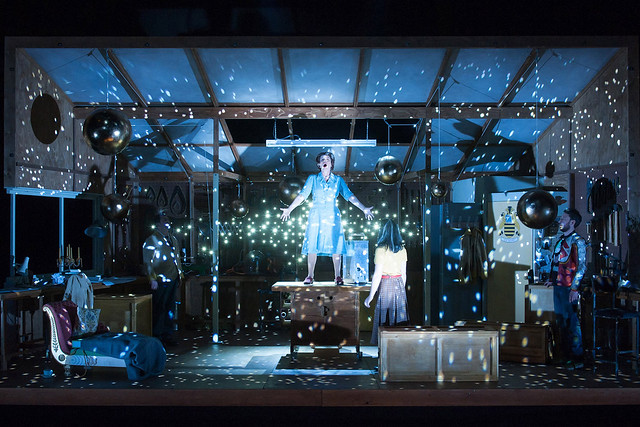 For generations, the De Selby family has been famous for making the finest opera props. In the middle of their most important commission yet, the senior designer Parabola falls ills. Family matriarch Great Aunt Doric sends in a freelancer, Eames, to make up the shortfall – but his technologically advanced ideas conflict sharply with the De Selbys’ traditional honed craftsmanship. Meanwhile, Parabola’s illness seems to be spreading…

Insight of the Ridiculous

Composer Matt Rogers (also known as Gameshow Outpatient) has written prolifically for opera. His previous commissions include The Raven, after Poe, for Grimeborn Festival in 2010; The Trial of Dennis the Menace for Southbank Centre in 2012; On the Axis of the World, about Scott in the Antarctic, for Cambridge City Opera in 2014; and La Celestina for Opera Erratica and the Metropolitan Museum of Art. He describes how he finds what people often see as opera’s ridiculousness to be an integral part of its power: ‘For me, it’s not that opera itself is ridiculous, but rather that it can employ ridiculousness to portray indescribable aspects of the human experience.’

The influences on Rogers’s music are extraordinarily diverse. Conductor Richard Baker describes how ‘Matt is strongly influenced by computer games music, but also references a variety of operatic styles, and there is one moment [in the opera] of near-perfect Sondheim pastiche’. The composer himself says ‘The music of Symphony X, Ozma, Hair Stylistics, Olivia Newton-John and Troyka has all had significant bearing on what I’ve written’. The Virtues of Things is orchestrated for string and wind quintets – in one sense a classical ensemble, but used by Rogers in highly individualistic ways.

The Virtues of Things is Rogers’s first collaboration with librettist Sally O’Reilly, best known for her writings on art. The world premiere production is directed by Bijan Sheibani, a former Associate Director of the National Theatre, where his projects included Emil and the Detectives and the US tour of War Horse. His regular collaborator Giles Cadle creates the designs, while Matt Haskins (Glare and The Commission/Café Kafka for The Royal Opera) creates the lighting design. Baker, himself a composer, conducts Aurora Orchestra in their tenth-anniversary year. The five singers of the cast complete a talented line-up that features some of the most exciting rising starts working in contemporary opera and theatre.

The Virtues of Things is a co-commission and co-production between Aldeburgh Music, Opera North and The Royal Opera; its premiere in the Linbury Studio Theatre will be followed by performances at Snape Maltings and the Howard Assembly Room, Leeds. It is the second in an annual collaboration that began in 2013, the year of Benjamin Britten’s centenary. Inspired by Britten’s dedication to intimate chamber operas, the collaboration focusses on commissioning work on the ‘middle scale’: ‘This is no longer seen as just a scale for “artist training” – instead, the work is an opportunity to engage audiences in the most innovative and highest quality composition’, say Kasper Holten of The Royal Opera, Roger Wright of Aldeburgh Music and Richard Mantle of Opera North.

The Virtues of Things runs 2–6 May 2015. Tickets are still available.

The production is a co-commission and co-production with Aldeburgh Music and Opera North.