Our quick introduction to this double programme of chamber operas by Harrison Birtwistle. 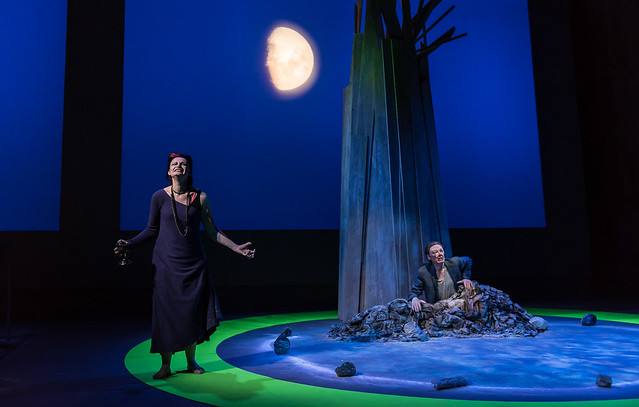 Regular Collaborators
Harrison Birtwistle is acknowledged as one of the finest composers of his generation. He has been at the forefront of contemporary music in the UK since the 1960s and is widely admired for the highly distinctive integrity of his musical vision. He first worked with the award-winning poet David Harsent in 1991 on the opera Gawain, a Royal Opera commission. Their subsequent collaborations include the opera The Minotaur (2008, also for The Royal Opera), the song cycles The Woman and the Hare (1999), From Vanitas (2009) and Songs from the Same Earth (2013) and the choral work The Ring Dance of the Nazarene (2003).

An Unshakeable Obsession
Over his career Birtwistle has returned to myth and folktale almost obsessively. He treated the Greek myth of Orpheus, the singer who attempts to rescue his wife from Hades, with operatic grandeur in his masterpiece The Mask of Orpheus (1986), and has explored the same myth in works including the dramatic scene Nenia: the Death of Orpheus (1970), the choral work On the Sheer Threshold of the Night (1980), the opera The Second Mrs Kong (1994), the song cycle 26 Orpheus Elegies (2004) and the ‘scena’ The Corridor (2009). He has also explored other Greek myths in such works as Theseus Game (2003) and The Io Passion (2004).

The Corridor
Birtwistle wrote The Corridor, a scena for tenor, soprano and six instrumentalists, for the 2009 Aldeburgh Festival, where it was the inaugural production in the Britten Studio. The Corridor focusses on the moment when Orpheus looks back at Eurydice when leading her from hell, and so loses her forever. Birtwistle has said, ‘I think one point about telling a myth, is always to tell a known myth. The moment of his turning back is the key thing that’s known about the story of Orpheus and Eurydice. It’s the most dramatic element. So to begin there seemed interesting’.

The Cure
Birtwistle and Harsent’s latest work, The Cure, is a companion piece for The Corridor, and has its premiere at the Aldeburgh Festival on 12 June 2015. Birtwistle was inspired by a few lines from the 14th-century poem Confessio amantis by John Gower, which describe the witch Medea gathering herbs in the moonlight: ‘Al specheles and on the gras / Sche glod forth as an Addre doth’. Harsent remembers, ‘The image of Medea under moonlight – barefoot, her hair down, skirts lifted, the world about her silent and gliding out like an adder – was the kick start for The Cure’. The new chamber opera tells of how Medea restores youth to Aeson, father of her lover Jason. It is written for the same forces as The Corridor.

Unexpected Parallels
There are striking differences between the two operas: in The Corridor the instrumentalists are on stage, almost interlocutors with the characters; that work’s soloistic instrumental writing contrasts against what Birtwistle calls The Cure’s ‘more mellifluous, more linear’ soundscape. But Harsent’s librettos unite the works in a consideration of our failure to understand one another. Both Eurydice and Aeson have conflicted feelings about the transformations wished on them by others. Eurydice worries she is no longer at home with the living, that ‘my true language the soft / hints and gentle laughter of the dead’; while Aeson fears ‘another trudge into old age, waiting / for my sight to fail, my hearing to fail, my body to weaken’.

The Corridor/The Cure runs 12–15 June 2015 at the Aldeburgh Festival and 18–27 June 2015 in the Linbury Studio Theatre. Tickets are still available.

The production is a co-production and co-commission with Aldeburgh Music, with additional support from the London Sinfonietta, and is generously supported by The John S. Cohen Foundation and the Boltini Trust.