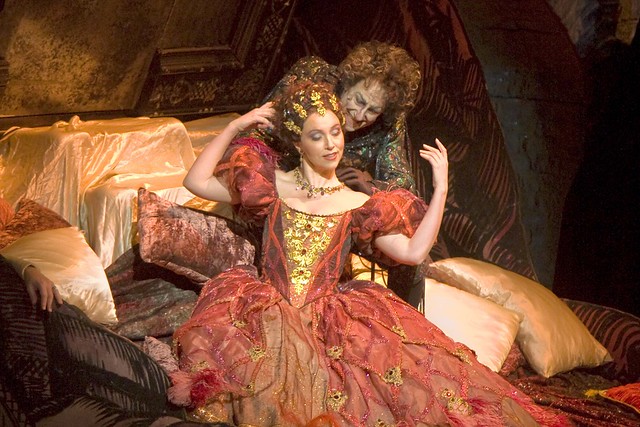 The poet Hoffmann has fallen in love with the opera singer Stella, but their relationship is threatened both by Hoffmann’s alcohol addiction and by the strange and sinister Councillor Lindorf. In a tavern, Hoffmann tells his friends of the three loves of his life – Olympia, Giulietta and Antonia – and of the mysterious villain who resembles Lindorf and has blighted each of his love affairs. Will this love affair be any different? And will Hoffmann’s Muse convince him to put art before alcohol?

John Schlesinger’s magnificent production combines styles from Hoffmann and Offenbach’s times. It reflects the epic nature of Hoffmann’s tales through rich and detailed sets (including a re-creation of a German beer cellar, and an opulent Venetian palazzo complete with gondola) and sumptuous costumes. Schlesinger explores the darker elements of Hoffmann’s character (highlighting his drunkenness and paranoia) but ultimately reveals his commitment to his art.

From the Farcical to the Sublime

Les Contes d’Hoffmann illustrates Offenbach’s versatility as a composer. There are lively choruses and quirky character numbers such as Hoffmann’s ‘Chanson de Kleinzach’, Lindorf’s roguish aria in the Prologue and Frantz’s aria in Act III; but there are also exquisite lyrical episodes, including the Barcarolle that opens Act II, and Antonia’s aria and duet with Hoffmann in Act III. Other treats include Olympia’s coloratura showpiece aria in Act I, and the thrilling septet at the end of Act II, as Hoffmann realizes he’s been cheated of love once again.

Offenbach and his librettists Barbier and Carré deftly blended fact and fiction. They loosely based their protagonist on the writer, lawyer and musician E.T.A Hoffmann. However, they modelled each act on one of Hoffmann’s stories, substituting the poet for his fictional protagonists. They also invented the character of Miracle in Act III, thus creating the sense that throughout the opera Hoffmann is constantly stalked by a demonic villain, just as he is protected by his ‘Muse’, Nicklausse.

Les Contes d’Hoffmann was Offenbach’s final work, and only his second opera (as distinct from operetta). The composer died four months before the opera’s premiere at the Opéra-Comique in Paris on 10 February 1881; his friend Ernest Guiraud completed the orchestration for the premiere, which was given without the Giulietta act. The opera was a great success, and has continued to be regularly performed in a variety of versions, some including material only discovered in recent decades.

The production will be broadcast live to cinemas around the world on 15 November 2016. Find your nearest cinema.

The production is given with generous philanthropic support from Mrs Aline Foriel-Destezet and Mr and Mrs Christopher W.T. Johnston.