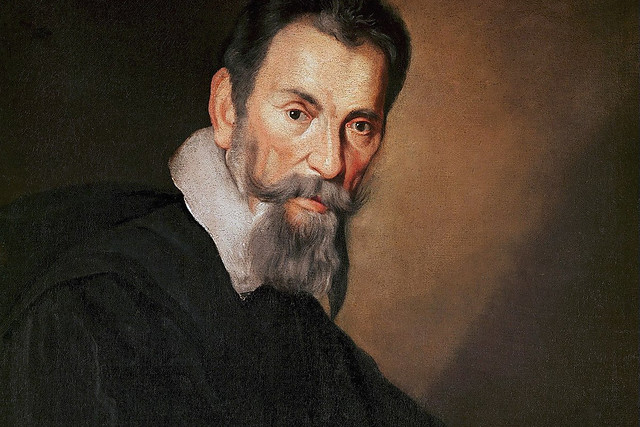 Copy of a portrait of Claudio Monteverdi by Bernardo Strozzi, hanging in the Gallerie dall'Accademia in Venice (1640)

Combining an action-packed plot with a musical exploration of the full range of human emotions, The Return of Ulysses broke new musical ground at its Venice premiere in 1640. Today, audiences can feel something of the excitement 17th century audiences must have felt when this intimate opera was first staged.

For audiences at the Venice premiere it may also have been their first experience of opera. Venice only opened public opera houses (the first in the world) in 1637. So with Ulysses, a new art form that began as private court entertainment for the nobility became an art form accessible to all.

Giacomo Badoaro, a Venetian nobleman, amateur poet and mover and shaker in local politics, decided that only a work by the great composer Claudio Monteverdi would ensure the success of the new art form of publically available opera. So he took one of the oldest stories ever told – the homecoming of Ulysses in Homer’s Odyssey – and wrote a libretto. He sent it to the 73-year-old Monteverdi, who was then director of music at Venice’s St Mark’s Basilica, urging him with great flattery to come out of retirement and set it to music.

Monteverdi rose to the challenge. His late operas were hugely influential for subsequent composers, and particularly his pupil Francesco Cavalli, the most famous opera composer of the later 17th century. Cavalli's large-scale operas were renowned for their intricate plots, their combination of tragedy and comedy and their tuneful melodies – none of which would have been possible without Monteverdi.

Ulysses (Odysseus) has finally returned home to Ithaca, after ten years fighting in the Trojan War, and ten years wandering on the seas. But Ithaca has changed during his absence, and has been infiltrated by migrants, including suitors who want to marry his wife Penelope. Will he be able to regain his wife and home?

The Return of Ulysses is based on the final parts of Homer’s epic poem The Odyssey, one of the oldest and most exciting adventure stories of all time. Ulysses was the first opera to be based on a great work of classical literature, as opposed to more popular mythical subjects, and one of the first to focus on complex human characters rather than divine or semi-divine beings.

Just like Vivaldi’s Four Seasons concertos, that beautifully picture nature in music, and Handel’s Messiah, which first made the chorus an emotional focus, The Return of Ulysses broke new musical ground. Monteverdi's flexible writing for the voice shifts between conversational ‘sung speech’ (recitative), pure song (aria) and a combination of the two (arioso). The style is not familiar to those used to later operas (Mozart or Verdi, for example), but it’s a brilliant way to convey the characters’ changing emotions, their personalities and social status.

The sensual servants Melantho and Eurymachus converse in tuneful, dance-like music – including a gorgeous love duet. Ulysses moves from pensive recitative to melody each time his longing for home and family deepens. And the noble Penelope sings in stark recitative until she finally recognizes Ulysses and their voices join in ecstatic song.

The 15 players of Christian Curnyn’s Orchestra of Early Opera Company (in this setting at the centre of the action) interact closely with the singers, just as in Monteverdi’s time. They are the ideal instrumental accompaniment for this very human operatic drama. The pure sounds of the early instruments, rarely heard in mainstream opera – including the haunting, rich-toned lirone and the delicate theorbos and harps – add to the opera’s sense of intimacy. The cornetts, early brass instruments that are also rarely heard, bring a regal majesty to the opera’s grandest episodes.

This new production by John Fulljames puts the audience at the heart of the action. In the amphitheatre-like space of the Roundhouse they sit literally ‘around’ the players and the orchestra. The legacies of war – migration, displacement and the search for home – are central themes in this modern interpretation as Penelope’s suitors become refugees searching for a new home. The passing of time is symbolized in Hyemi Shin’s slowly revolving set, and the importance of community and democracy by the addition of a community chorus. The gods and their divine meddling are are almost completely removed to focus on the humanity of the opera. And Kimie Nakano’s contemporary costumes remind us how Ulysses’ situation parallels that in the Mediterranean today, where migrants escaping conflict search for a new home.

Today, this opera’s story is surely as relevant as ever.

If you liked The Return of Ulysses, why not try...

The Return of Ulysses runs 10–21 January 2018 at the Roundhouse. Tickets are still available.

The production is a collaboration between The Royal Opera and Roundhouse
Made with generous philanthropic support from Stefan Sten Olsson.

This article has been categorised Opera and tagged background, by John Fulljames, Claudio Monteverdi, essentials, history, Opera Essentials, Production, The Return of Ulysses