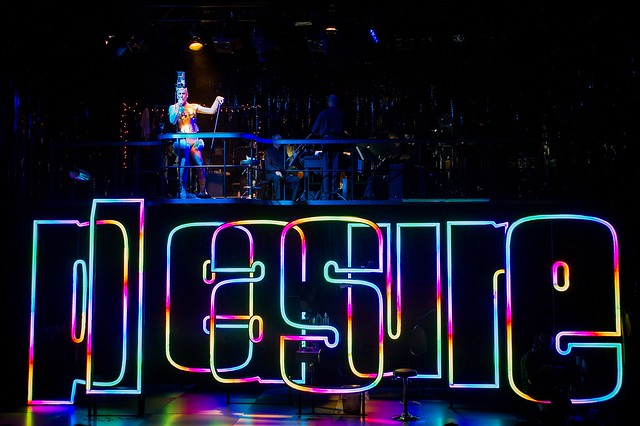 Young men flock to the gay nightclub Pleasure. They worship at the feet of drag queen Anna Fewmore. But some also seek solace from toilet attendant Val. She’s a shoulder to cry on, a confidante – and an enigma. When the beautiful, unpredictable Nathan comes looking for answers, Val’s mystery begins to unravel.

Liverpudlian composer Mark Simpson shot to fame in 2006 at the age of 17, when he became the first person in the history of the awards to win both the BBC Young Musician of the Year (as a clarinettist) and the BBC Proms/Guardian Young Composer of the Year. In the last decade he has gone on to cement his position as one of Britain’s most exciting musical talents, as both a performer and composer. His creative relationship with poet Melanie Challenger, librettist for Pleasure, began in 2008 when he read her collection Galatea; Simpson recalls how ‘up until this point I had never experienced the written word as viscerally as I had experienced musical sound’. He went on write A mirror-fragment…, inspired by Galatea, and in 2015 they collaborated on the oratorio The Immortal for the Manchester International Festival.

The inspiration for Pleasure came from a night out in Liverpool. Simpson recalls how ‘one evening, as I stood pouring my heart out to a toilet attendant in one of the clubs, I suddenly started to see the world around me with a new sense of objectivity… This was a world where you could escape your own reality. But at what point was the pursuit of pleasure an escape?’. He took this kernel of an idea to Challenger, who wove from it a libretto that takes real-world grittiness and blends it with super-heightened reality and themes from Greek mythology. She explains how ‘one of my chief influences were the Homeric Odes to Dionysus. But another was the dark and brilliant spit-and-sawdust humour of Mancunian drag queen Divine David.’

A house of cards

The creative team for the premiere of Pleasure includes director Tim Albery and designer Leslie Travers, each highly-acclaimed for their work in opera internationally – Albery’s previous credits with The Royal Opera include Tannhäuser. Simpson recalls the experience of watching his first opera come to life in rehearsals: ‘I’ve never seen first-hand this level of detail going into the directing process. It’s taught me a lot about how to approach the inner world of the characters and how to reflect this in the music I write… On a daily basis, I am confronted with just how complex the staging of opera can be. If one thing gets out of sync, the delicate house of cards we are building collapses. It is a huge collaborative effort.’

Pleasure is the third in a series of co-commissions between Aldeburgh Music, Opera North and The Royal Opera, begun in 2013 to commemorate the legacy of Benjamin Britten through chamber operas from a new generation of opera makers. Pleasure is a tight 75 minutes long, scored for just four singers and ten musicians – played by members of acclaimed contemporary ensemble Psappha, which gave the premiere of Simpson’s first piece when he was 14. The opera had its premiere at Howard Assembly Room in Leeds on 28 April, with Alfred Hickling writing for The Guardian ‘Simpson has pulled off a genuine coup’.

Pleasure runs 12–14 May 2016. Tickets are still available through the Lyric Hammersmith.

The production is a co-commission and co-production with Aldeburgh Music and Opera North, supported by a legacy from Ms D. Kurzman via Arts Council England.