A quick guide to Donizetti's blistering Tudor drama, which pits Mary Queen of Scots against Elizabeth I. 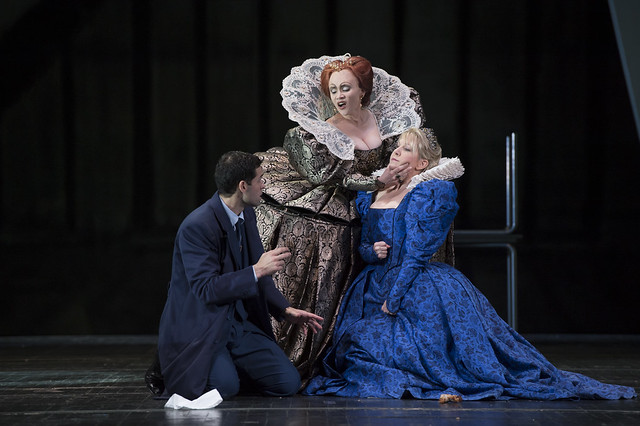 Maria Stuarda has been imprisoned by her cousin, Elisabetta I of England. Roberto, Conte di Leicester, urges Elisabetta to meet with Maria, but Elisabetta becomes jealous of Leicester’s admiration for her cousin. Will Elisabetta succumb to temptation and use the meeting as a chance to destroy Maria?

Gaetano Donizetti’s opera – as with Friedrich von Schiller’s source play – was not a historical record, but a constructed drama. Moshe Leiser and Patrice Caurier’s production mixes the iconic historical figures of the two queens with contemporary characters in order to stress that the violence linked to power and desire remains constant in any period. Elisabetta and Maria are enclosed within the shell of their political function, but they are also real characters in a world that could be familiar to us. Now, as then, the horror of capital punishment remains the same.

Donizetti wrote Maria Stuarda in 1834 for the Naples Teatro San Carlo, intending it as a vehicle for the soprano Giuseppina Ronzi de Begnis. But due to its subject, the opera was banned in Naples before it even made it to the stage – the opera was only performed because the great Maria Malibran insisted on performing it, and sang the title role in the work's premiere at La Scala, Milan, on 30 December 1835. The local authorities there also moved to ban the opera, and it gradually disappeared from the repertory, until a revival of interest in 1958. It has become increasingly popular ever since.

A Tribute to Schiller

The libretto of Maria Stuarda is based on Schiller’s 1800 play Maria Stuart, which depicted the final days of Mary, Queen of Scots, and her fateful meeting with Elizabeth I (an event that was entirely invented by Schiller; the two queens never met in reality). The intensity of the subject appealed to the composer, who added a romantic dimension by having Leicester fall in love with Maria. As Donizetti’s librettist for the opera, Giuseppe Bardari, was very young and inexperienced, Donizetti may well have had a hand in the libretto himself.

The score for Maria Stuarda contains some of Donizetti’s most moving music, particularly Mary’s confession duet with Talbot and her aria in the finale as she calmly goes to her death. The opera also provides a magnificent showcase for the two singers playing Maria and Elisabetta in their extended duet at the end of Act I. Famous pairings for the roles of Maria and Elisabetta have included Joan Sutherland and Huguette Tourangeau, Janet Baker and Rosalind Plowright, and Edita Gruberová and Agnes Baltsa.

Maria Stuarda runs from 5–18 July 2014. Tickets are still available.
The production is a co-production with Polish National Opera, Théâtre des Champs-Elysées, Paris, and Gran Teatre del Liceu, Barcelona, and is given with generous philanthropic support from Lord and Lady Laidlaw, Susan and John Singer and Michael Hartnall.