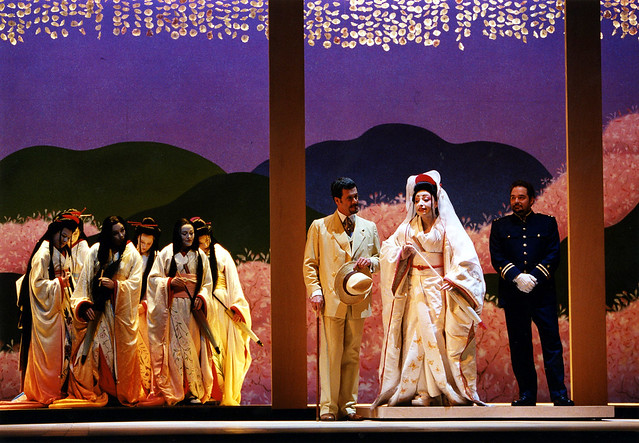 The young Japanese geisha Cio-Cio-San agrees to marry B.F. Pinkerton, a dashing US Navy lieutenant. She believes that it is a marriage of love, but Pinkerton intends the marriage to only be a temporary arrangement.

Puccini and his librettists Giacosa and Illica based Madama Butterfly on the popular play Madame Butterfly by US playwright David Belasco, who in turn was inspired by a short story by John Luther Long. This story was inspired by a real-life incident witnessed by Luther Long’s sister Jennie, a missionary who worked in Japan, and who encountered a Japanese girl nicknamed ‘Miss Butterfly’ who was deserted by her American lover.

The mysteries of the East

Moshe Leiser and Patrice Caurier’s production echoes the fascination with Orientalism and the East in late 19th- and early 20th-century art and culture. Christian Fenouillat’s elegant designs and Agostino Cavalca’s costumes pay tribute to Japanese paintings and photographs at the time of the opera’s genesis, and to visions of the East by artists such as Monet.

Puccini conceived Madama Butterfly as a conflict between East and West, and shows this in his music. He studied traditional Japanese songs (one of which, ‘The Lion of Echigo Province’, he associates with Cio-Cio-San in his opera), and attended a performance given by a Japanese theatre group led by the inspirational actress Sadayakko. The score of Madama Butterfly weaves in melodies based on Japanese songs; specific American references are also made, including recurring quotes from ‘The Star-Spangled Banner’.

From failure to success

Madama Butterfly was a failure at its premiere at La Scala, Milan, on 17 February 1904. Puccini was devastated and withdrew the opera for revision. Three months later, Madama Butterfly’s second version was rapturously received in Brescia. Puccini continued to make revisions during the following year. Madama Butterfly is now one of the best known and most admired operas in the history of the art form.

The production will be broadcast live to cinemas around the world on 30 March 2017. Find your nearest cinema.
The production is a co-production with Gran Teatre del Liceu, Barcelona, and is staged with generous philanthropic support from Mrs Susan A. Olde OBE, Aud Jebsen, Spindrift Al Swaidi and The Maestro's Circle.