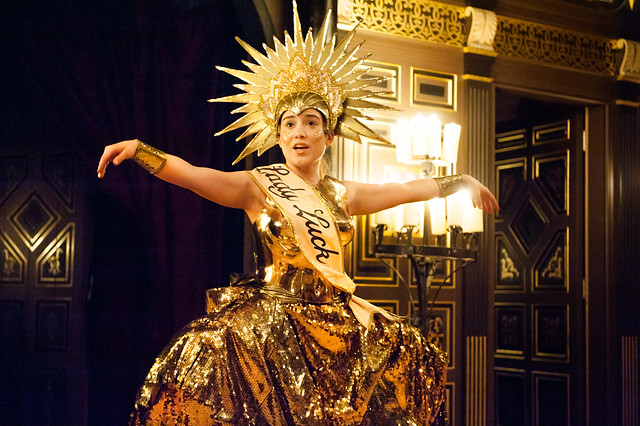 Princes Ormindo and Amidas have both fallen in love with Queen Erisbe. But Erisbe is married to the aged King Ariadenus, whom the princes are meant to be helping fight the Spanish. Erisbe struggles to choose between her two suitors – while Amidas’s rejected lover Sicle plots her revenge…

The composer of L'Ormindo, Francesco Cavalli was a Venetian musician who sang at St Mark’s Basilica under Claudio Monteverdi and later took over from him as maestro di cappella. Like Monteverdi, Cavalli embraced the newly developed form of opera, and his works for the new Venetian public theatres were hugely popular during his lifetime. Though left unperformed for centuries, Cavalli's works have recently enjoyed a renaissance, with works such as La Calisto and Eliogabalo being performed around the world.

Kasper Holten’s 2014 production was the first opera to be staged in the Sam Wanamaker Playhouse at Shakespeare’s Globe – which itself only opened in January of that year. The beautiful, candlelit playhouse is closely modelled on English designs for an indoor theatre thought to date from 1660 – just 16 years after the premiere of L’Ormindo at the Teatro San Cassiano in Venice in 1644. The Playhouse’s intimate scale is the ideal setting for Cavalli’s small instrumental ensemble, while the beeswax candles that adorn the performance space create a beautiful and dramatic effect.

A Runaway Success
Holten makes ingenious use of the unique space of the Sam Wanamaker Playhouse in his fabulously entertaining production: gods descend through the ceiling, spirits clamber through the floor, candles are extinguished as the lovers draw close – all of whom are bedecked in Anja Vang Kragh’s fabulously inventive costumes. The production was acclaimed by audience and critics – The Guardian summarized, ‘A more exquisite evening would be hard to imagine’.

L’Ormindo runs 3 February–5 March 2015. Tickets are sold out but returns may become available.
The production is a co-production between Shakespeare’s Globe and The Royal Opera.