Our quick guide to Rossini's comic masterpiece, The Barber of Seville. 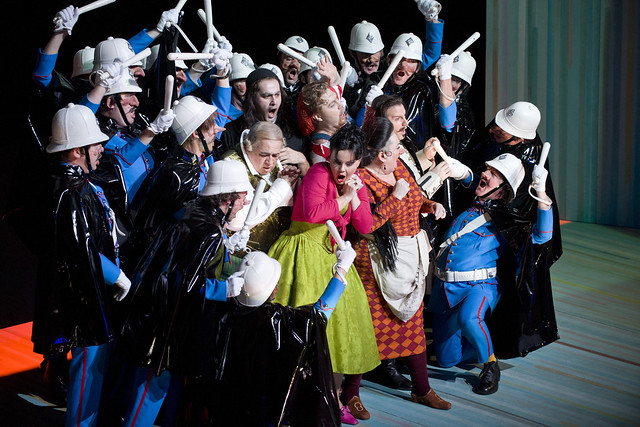 Count Almaviva has arrived in Seville to woo a beautiful woman he glimpsed in Madrid. But, unbeknownst to the Count, Rosina is due to be married to her guardian, Doctor Bartolo, the next day. Can Figaro, the quick-witted town barber, bring about a happy ending?

Gioachinio Rossini’s Il barbiere is the earliest opera to have remained constantly popular on the international stage. But its premiere, in Rome on 20 February 1816, was a disaster. Licking his wounds in a letter to his mother, Rossini said: ‘My opera was solemnly booed’. But by the second night the audience had changed their mind and the composer had to acknowledge their applause five or six times.

A Creature of Society

The first version of what would become Pierre Beaumarchais’s play Le Barbier de Séville was called Le Sacristain and included musical movements. When it was rejected by the musical theatre of Paris in 1772, Beaumarchais rewrote the work as a spoken social comedy. Rossini and his librettist Cesare Sterbini then transformed Beaumarchais’s neighbourhood schemer into a quick-witted facilitator who’s at the heart of the town’s secret affairs.

A Feast for the Eyes

Moshe Leiser and Patrice Caurier’s Technicolor take on Rossini’s masterpiece of comic opera revels in the work’s farcical fun, from the bold colour of Agostino Cavalca’s costumes to the delightfully surprising set designed by Christian Fenouillat – including a rather rocky finale to Act I!

Il barbiere is peppered with show-stopping arias that let the opera’s performers flex their coloratura muscles. The most famous, is Figaro’s opening aria – the fiendishly fast ‘Largo al factotum’ from Act I scene 1. It follows quick on the heels of the elaborately decorated 'Ecco, ridente in cielo', with which the Count unsuccessfully serenades Rosina's window. No less impressive, though, is her ‘Una voce poco fa’ from Act I scene 2 in which she lets the audience in on a secret or two. One of the highlights of the opera, though, comes in Act II scene 1, when the successfully united couple spend so long singing a love duet, their ladder has gone by the time they try to escape through the window.