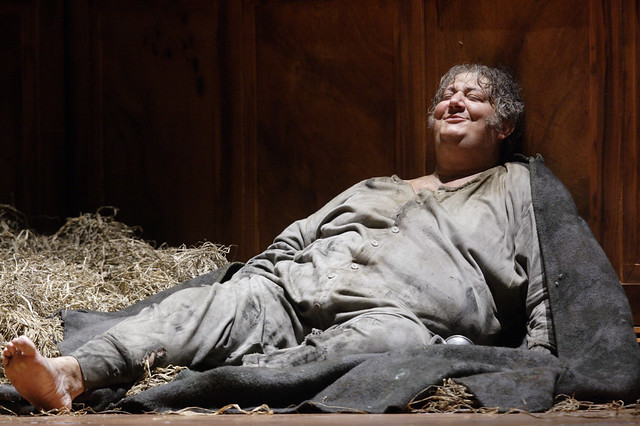 Old, large and lecherous, Sir John Falstaff can’t resist the ladies. But they can resist him, and three of them plot to put an end to his advances once and for all while having fun at his expense.

The plot of Falstaff is taken from Shakespeare’s The Merry Wives of Windsor, written for Queen Elizabeth I allegedly because she enjoyed the character of Falstaff in Shakespeare’s Henry IV plays so much. Boito, working closely with Verdi, made some judicious cuts to Shakespeare’s complicated plot, and also added some Falstaff-related material from Henry IV Parts I and II. Verdi regarded his protagonist with affection, referring to him in letters as Pancione (Pot Belly).

The Old and the New

Director Robert Carsen explores one of the major themes of Falstaff – the contrast between the often poorly-off English aristocracy and the wealthy and upwardly mobile middle classes – by staging the opera in the 1950s. This was a time of great change in Britain, often compared to the era of Elizabeth I. Falstaff’s beloved food features prominently throughout. Hunting is also a major theme – and watch out
for the handsome Shire horse in Act III.

A Perfect Match of Music and Text

Verdi matches the wit and action in Boito’s libretto with a score of almost seamless musical continuity, the boundaries between arias, ensembles and recitative blurring as the music follows the rapid pace of the drama. Verdi claimed he wrote Falstaff for pleasure, and indeed good humour reigns throughout, with the opera’s finale a celebration of the power of laughter.

A Favourite with Musicians

Falstaff has always been popular with musicians. The conductor Arturo Toscanini wrote that ‘there is no opera more beautiful, more complete, newer and more Latin than Falstaff’. Many baritones have greatly enjoyed playing the title role. At Covent Garden, Falstaff was regularly performed throughout the 20th century and was the first opera given when the Royal Opera House re-opened in December 1999 after a long period of development.