Oh yes it is!: The surprising history of pantomime at the Royal Opera House

Our seasonal Item of the Month from ROH Collections shows the rich (and surprising) history of the Christmas panto at the ROH. 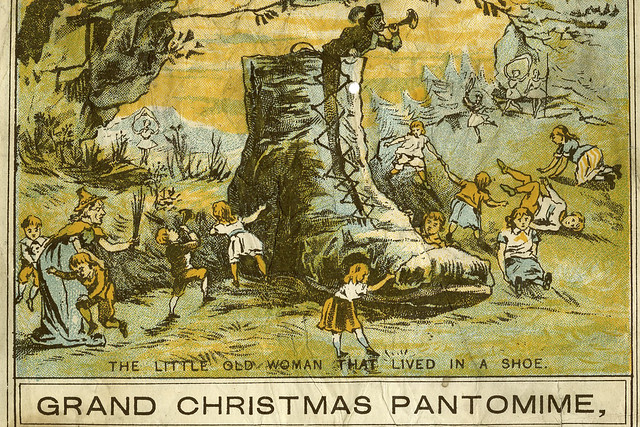 Panto season is upon us, and so in ROH Collections we’ve been rummaging through the historic programmes and playbills that reveal the surprising history of pantomime at the Royal Opera House – the two have more in common than you might expect.

John Rich, founder of the first theatre on our Covent Garden site, is also credited with the invention of the English pantomime. Rich brought together several different elements – including masked characters from the Italian commedia dell’arte – to create a new art form that is the ancestor of the modern pantomime. This new style brought Rich great success, winning him particular renown for his own lively portrayals of the character Harlequin. Until his death in 1761, his Theatre Royal, Covent Garden, was best known for its pantomimes.

The earliest extant pantomime playbill in ROH Collections is for Lord Mayor’s Day, or Flight from Lapland, dated 18 January 1783. Since then there has been a vast array of pantomimes put on at the Royal Opera House: from more obscure productions such as Friar Bacon, or Harlequin’s Adventures in Lilliput and The Magic Cavern, or Virtue’s Triumph, to such titles such as Cinderella, Aladdin, Babes in the Wood and Mother Goose, still regularly staged today.

Extract from a programme for St George and the Dragon performed by the Royal English Opera, Covent Garden, 8 Feb 1864. Royal Opera House Collections

In its early days, pantomime was performed at any point throughout the year; but from around 1791 we see descriptions of a ‘Grand Christmas Pantomime’ emerge, and they began to be staged more regularly in December. They also increasingly became understood as works suitable for young children – a sketch in ROH Collections from 1871 shows a group of children enjoying a pantomime party, possibly a performance of Blue Beard on Boxing Day. This ROH Christmas tradition continued well into the 20th century: in February 1939, the young princesses Elizabeth and Margaret attended a performance of Red Riding Hood with their mother Queen Elizabeth.

Panto programmes also give us a fascinating insight into advertising of the time. One of the regular contributors was Eugene Rimmel, Perfumer, who would often take out full-page advertisements on the back of programmes. These highlighted a variety of products including floral crackers to ornament the hair or button holes, toilet vinegar and Hamagaki tooth powder, as well as taking advantage of the festive season to advertise their ‘Christmas Novelties’. If you were particularly lucky, you might have been at a performance where the programme had been specially perfumed by Rimmel’s.

Extract from a programme for St George and the Dragon performed by the Royal English Opera, Covent Garden, 8 Feb 1864

Do you have any memories of pantos at the Royal Opera House?