The Olympic Journey: The Story of the Games open for two weeks only. 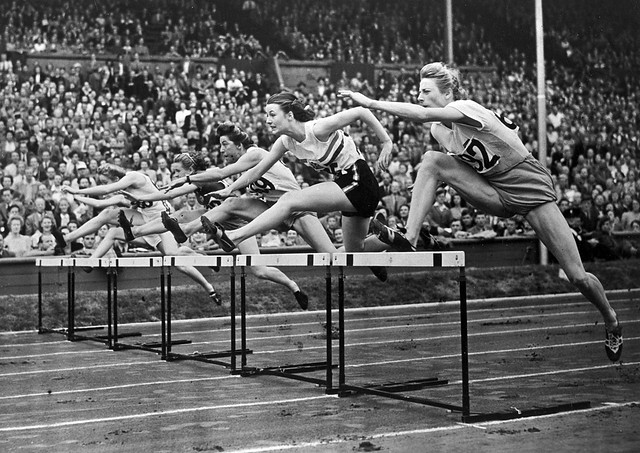 Fanny Blankers-Koen of Holland in action in the 80 metres hurdles at the 1948 London Olympics. ©ROH/IOC 2012

For two weeks only, the Royal Opera House is offering visitors a once-in-a-lifetime opportunity to see extraordinary Olympic artefacts from across the ages.

The Olympic Journey: The Story of the Games is a free exhibition that traces Olympic history from its origins in Ancient Greece to the professional sportsmen and women of today.

Veteran runner H J Bignall (right) hands over the Olympic torch to Fred Prevett at Redhill, Surrey, during the flame's journey from Dover to Wembley Stadium, London, for the opening of the 1948 London Olympics ©ROH/2012

Fanny Blankers-Koen of Holland in action in the 80 metres hurdles at the 1948 London Olympics. ©ROH/IOC 2012

Teofilo Stevenson of Cuba (right) focuses intently on his opponent during a heavy weight bout in the 1980 Summer Olympic Games held in Moscow, USSR. ©ROH/2012

Siamak Ghaffari of the USA, right, in action against Aleksandr Karelin of Russia in the 1996 Olympics ©ROH/2012

Hungary's Krisztina Egerszegi in action to win the gold medal in the 400m Medley in the 1992 Olympic Games. ©ROH/2012

From chariot racing to beach volleyball, the exhibition includes the personal stories of iconic sporting heroes, as well as a display all of the Summer Olympic torches since 1936. Visitors will even have the chance to have their photo taken with the London 2012 Olympic torch.

All of the Summer Olympic medals since 1896 will also be on display. Look at this infographic to see just how much Olympic medals have changed over the years.

Sir Steve Redgrave, five times Olympic gold medallist, is just one of several modern day athletes to be featured in the exhibition.

I hope people find the time to see some of the artefacts at the Royal Opera House including my oar and rowing suit from Sydney 2000. The exhibition is an inspirational story of Olympians down the ages. It’s a real honour to be included in this exhibition. – Steve Redgrave

Other Olympians featured in the exhibition include record-breaking Dame Kelly Holmes, who famously won gold in both the 800m and 1500m at the Athens Olympics 2004, and Balbir Singh, whose outstanding performances on the hockey pitch helped to secure team gold for India in three Olympics.

The exhibition was opened on Saturday by Antoine de Navacelle, great nephew of Pierre de Coubertin, the founder of the modern Olympic movement. 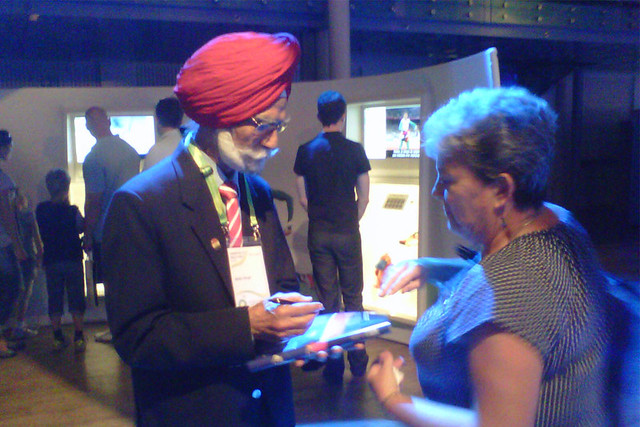 The exhibition, held in conjunction with BP and The Olympic Museum in Lausanne, will open every day from 8am to 7pm until 12 August, with the exception of Tuesday 31 July when it will close early at 1pm due to an event in the evening. View the trailer.

Entry is free and tickets are not necessary.

This article has been categorised Off stage and tagged Balbir Singh, Britain, free things to do in london, India, Kelly Holmes, London 2012, Olympic Torch, olympics, Steve Redgrave, The Olympic Journey: The Story of the Games, The Olympic Museum, winners