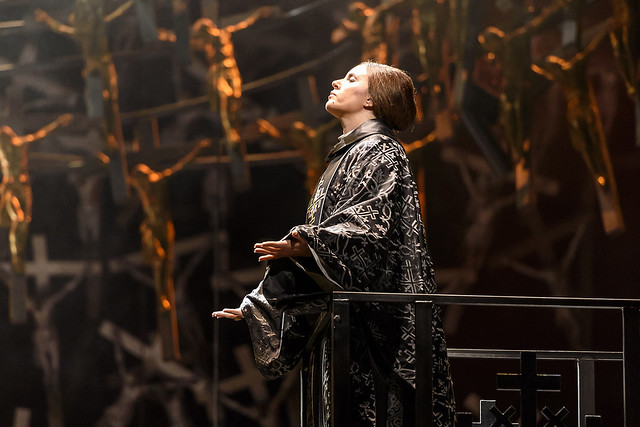 ‘Casta diva’ is an aria from Vincenzo Bellini’s 1831 opera Norma. It takes place in Act I, shortly after the title character’s first entrance. Bellini originally wrote the role for his friend Giuditta Pasta and the part is considered one of the most challenging roles in the repertory – for a variety of reasons, although particularly the music. It requires a flexible voice that also has tremendous power over a wide range. ‘Casta diva’ is a prime example not only of bel canto (the generic term for a style of music popular in early 19th-century Italy, where high importance is placed on vocal beauty), but also of Bellini’s own distinctive style.

‘Casta diva’ takes place in Act I scene 3. Before the aria, we have encountered Norma’s father Oroveso and his followers. They’re eager for war, but they have to wait for approval from Norma, who as priestess has the final say. We then meet Norma’s secret lover Pollione, an enemy of her people. We learn that he’s fallen out of love with Norma and wishes to abandon her and their two children. Then comes ‘Casta diva’. In the preceding recitative Norma argues with Oroveso about the need for war; in the aria itself she leads her people in a serene prayer for peace. This calm doesn’t last long, though – soon Pollione’s outrageous behaviour will lead Norma to give the signal for war.

What do the words mean?

Verdi once praised Bellini’s ‘long, long, long melodies; melodies such as no one had written before him’. ‘Casta diva’, along with several other passages from Norma, exemplify this trait. In the aria Norma sings in incredibly long, smooth lines, embellished with the intricate ornamentation that is a distinctive feature of bel canto. The accompanying orchestration is initially quite light, with lilting strings and a flute obbligato in counterpoint to Norma’s voice. Bellini gradually thickens the orchestral sound and adds in a sotto voce chorus, to build the aria in a long crescendo that is a superb intensification of this ardent prayer for peace. Take a look at the full score of ‘Casta diva’ (from p.115 for the recitative, from p.123 for the aria), from IMSLP.

Norma is one of Bellini’s greatest works and the piece as a whole makes for thrilling drama. The love triangle of Norma, Pollione and Norma’s rival Adalgisa requires three exceptional singers, and Bellini draws on their skills to the full in the intense trio ‘Oh! di qual sei tu vittima’ that ends Act I (an innovation of Bellini’s, replacing the more usual chorus number). Norma and Adalgisa share two wonderful duets ‘Sola, furtiva, al tempio’ and ‘Si, fino all’ore estreme’, their voices entwining in rapturous beauty, while the fiery Norma/Pollione duet ‘In mia man alfin tu sei’ is irresistible in quite a different way. The war-hungry chorus sing a violent hymn in ‘Guerra, guerra! Le galliche selve’, while the long Act II finale ‘Qual cor tradisti’ brings the opera to its overwhelming climax.

Maria Callas is Norma’s most famous exponent and made it a signature role. She made numerous recordings but musicologist Roger Parker for Radio 3 selected her recording with Tullio Serafin for La Scala, Milan, as his favourite. Montserrat Caballé is probably the only other 20th-century singer really to challenge Callas’s dominance, but recordings by Joan Sutherland, Shirley Verrett, Beverly Sills, Renata Scotto and Anita Cerquetti also have their merits (and I've probably missed out somebody’s favourite). More recently, Cecilia Bartoli has made the role her own, particularly in an acclaimed recording with Giovanni Antonini and the period-instrument band Orchestra La Scintilla.

If you’ve gobbled up ‘Casta diva’ then other Bellini works will be worth a look, particularly I puritani and I Capuleti e i Montecchi. Other bel canto works that probably influenced Bellini include Spontini’s La vestale and Donizetti’s Anna Bolena. The influence of Norma itself stretched far and can be seen in many of Verdi’s operas – difficult to pick just one but you could choose Ernani, Luisa Miller, Stiffelio and the trio of Rigoletto, La traviata and Il trovatore. Even the notoriously picky Wagner was a Norma fan, and that influence can be seen particularly in the early Das Liebesverbot. Into the 20th century ‘Casta diva’ is strikingly quoted in Hans Krása’s Verlobung im Traum – a superb but sadly overlooked work now available in recording.

Norma runs 12 September–8 October 2016. Tickets are still available, and every Friday until Friday 7 October further tickets will be made available through Friday Rush.

The production is a co-production with Opéra national de Paris and is given with generous philanthropic support from Mrs Susan A. Olde OBE and The Tsukanov Family Foundation.