'My pen is rude, and I am not refined': Mozart's letters

The composer's letters to his father give a lively record of 18th-century life and his own energetic personality. 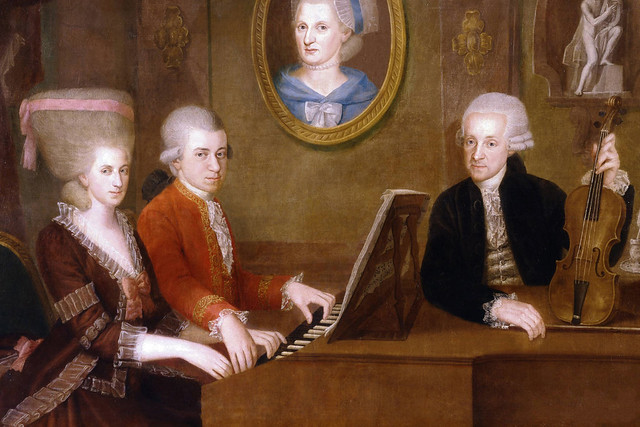 Wolfgang Amadeus Mozart with his sister Maria Anna and father Leopold, on the wall a portrait of his dead mother Anna Maria, by Johann Nepomuk della Croce. c. 1780

The 1,200 or so surviving letters that Mozart wrote to his family make an incredible resource. They provide an invaluable insight into how he lived, his development as a composer, and the buzzing musical world of the day. But most importantly, they give us a tangible portrait of the personality that produced such glorious music.

We’re particularly lucky with Idomeneo. In the summer of 1780 the 24-year-old Mozart received his greatest commission yet: an opera for the 1781 winter carnival in Munich. Mozart selected his own librettist – Abbé Varesco, chaplain to the archbishop of Salzburg – and the two worked closely in Salzburg throughout the autumn. But in November Mozart moved to Munich to begin rehearsals, and the rest of their correspondence is preserved in Mozart's letters to his father, Leopold.

From 8 November to 18 January Mozart wrote regular letters to Leopold, sometimes only two days apart. Amid the ever-present requests to be passed on to Varesco, there were enquiries about his father and sister's health and the progress of the family portraits, pleas for them to join him in Munich, worries about money, occasional bouts of homesickness, complaints about colds, reams of gossip, compliments for his Munich orchestra and numerous very direct (if not always flattering) assessments of his singers.

The castrato Vincenzo del Prato, who created the role of Idamante, comes in line for much vented wrath: 'He is incapable of singing even the introduction to any air of importance, and his voice is so uneven!'; 'When Del Prato comes I must sing to him, for I have to teach him his whole part like a child'; 'Raaff [the tenor singing Idomeneo] and Del Prato […] are the most miserable actors that ever trod the stage'; 'The stumbling-block was Del Prato; the wretch can literally do nothing.'

Luckily he seems to have got on better with the rest of the cast, particularly the Wendling sisters Dorothea (who sang Ilia) and Elisabeth (Elettra): 'Madame Dorothea Wendling […] insisted on hearing [her scena] played three times in succession'; ‘Lisel Wendling has also sung through her two arias half a dozen times, and is much pleased with them'. He advises his father 'to accustom yourself a little to the kissing system […] for each time that you come to Dorothea Wendling's (where everything is rather in the French style) you will have to embrace both mother and daughter, but – N.B., on the chin, so that the paint may not be rubbed off’.

The letters document an interesting dispute with the tenor Anton Raaff, an illustrious figure who had likely been instrumental in obtaining the commission for Mozart. As early as 15 November, Raaff had concerns about the Act III quartet (now considered one of the opera's finest passages): 'he wishes […] to have a pretty aria to sing instead of the quartet'. On 27 December Mozart wrote, ‘The more I think of the quartet as it will be on the stage, the more effective I consider it […] Raaff alone maintains that it will not be successful. He said to me confidentially, "There is no opportunity to expand the voice; it is too confined." As if in a quartet the words should not far rather be spoken, as it were, than sung!'. By 30 December Mozart had won: 'Raaff was glad to find himself mistaken about the quartet, and no longer doubts its effect'.

The letters also offer ample evidence of Mozart's developing dramatic instinct, as in this early request to Varesco: 'In the first act […] it is not fitting the king should be quite alone in the ship. If the Abbé [Varesco] thinks that he can be reasonably represented in the terrible storm forsaken by every one, WITHOUT A SHIP, exposed to the greatest peril, all may remain as it is; but, N.B., no ship […] the king might address a few words to his trusty companions, and desire them to leave him alone, which in his melancholy situation would be quite natural.'

Of course, we’ve only scratched the surface of this magnificent collection. Read more of Lady Wallace’s translations of Mozart's letters on Project Gutenburg.

Leave a reply to Alex · Cancel