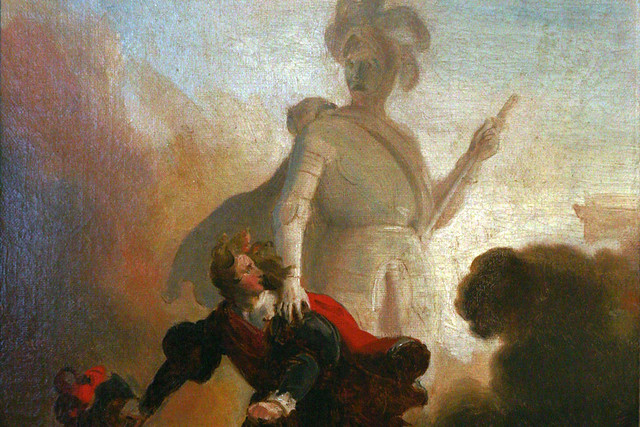 The finale of Mozart's Don Giovanni is terrifying. But the preceding scenes, for the most part, are highly enjoyable silliness. Act II opens with Giovanni boisterously chiding his hapless servant Leporello (a brilliantly rendered stock buffo character, recognizable for his rapid patter and continual complaining). There follows vintage farce in which Giovanni uses Leporello as bait for former girlfriend Elvira, gives the slip to hordes of vengeful peasants and still finds time to attempt some seducing.

A momentary chill note slips in when Giovanni and Leporello reconnoitre in a graveyard (Leporello has just escaped from furious nobles thinking he's Giovanni; Giovanni is fresh from an encounter with Leporello's girlfriend). Their bantering recitative receives an alarming interruption from the statue of the murdered Commendatore. The audience at the premiere would have received a double shock from the use of trombones in the Commendatore's accompaniment; at Mozart's time trombones were almost exclusively played in church, and thus had connotations of serious ritual and authority (see Mozart's later use in the 'Tuba mirum' of his Requiem). They still have an impact for a modern audience today, if only because Mozart has waited so late in the opera to use them.

But the trombones and the Commendatore disappear soon enough, and the following duet, where Leporello cringingly invites the statue to dinner on his master's orders, is back in the lively comic vernacular. A few scenes later the finale also opens in upbeat mood, with Giovanni guzzling his dinner to Leporello's envious groans. He's arranged some light entertainment from an onstage wind band, who play a few popular tunes. Mozart pops in a little in-joke for his Prague premiere audience by including his own 'Non più andrai'; the fantastic success of Le nozze di Figaro in Prague had directly led to Don Giovanni's commission.

The sense of playfulness continues even as an incoherent Elvira runs in to make a last-ditch attempt to save Giovanni, and even as Leporello tremulously describes the arrival of the stone Commendatore ('ta-ta-ta-ta!' he emphatically exclaims, describing the statue's dreadful tread). The orchestra mimics Leporello as under Giovanni's orders he shrinkingly approaches the door to let the ghost in. There's silence, then a short minor chord, then another silence.

Then the Commendatore enters to a massive diminished 7th, a dissonant, eerie chord built of consecutive minor 3rds. It's played fortissimo across the whole orchestra, with those dread-laden trombones and a drum roll from the timpani. The structure of the music, with a pulsing in the violins, immediately recalls the dramatic opening of the overture – but so much more so. It is a massive, furious gesture, as the drama veers into horror.

The Commendatore delivers his dire message of doom to music that quotes much from the first part of the overture – a steady long-short-long pulse; rising and falling scales in the violins and flutes; a mournful offbeat figure in the violins, underpinned by seething semiquavers – but here they are heightened through chromatically rising elongated phrases that build unbearably. By the time Don Giovanni defiantly grasps the Commendatore's hand and gasps at its coldness, Mozart only needs mark it with a piano tremolando, and our hearts freeze with Giovanni's.

Given the musical horrors around him, Giovanni's continued refusal to repent is agonizing: with Leporello we urge him 'say yes, say yes!'. It's too late, and after librettist Lorenzo Da Ponte's brazenly laconic stage directions, 'Fire on all sides; earthquake', Don Giovanni finally meets his end in a blistering major cadence. And then…

Out of a black sky – blue! The rest of the cast denounce the rotten behaviour of the happily vanished Giovanni, in a wonderfully chirpy final ensemble rich in imitation and melodic invention. It's a quicksilver change of mood, but with the same pulse as the preceding music and a consistent sense of dramatic richness. Mozart denies us a tragic end and instead gives us a whole lot more: he sends us out moved, joyous and wonderfully entertained.

The production is staged with the generous philanthropic support of David Hancock, Richard and Ginny Salter and the Royal Opera House Endowment Fund.