A look at one of Verdi’s finest duets, which sees the emotional reunion of a father and his daughter. 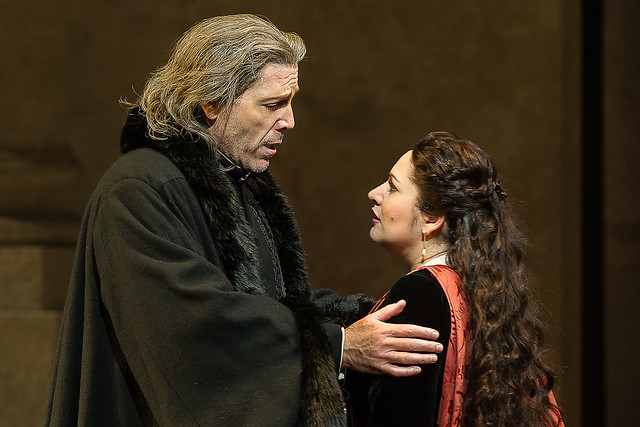 The Act I scene 1 duet for Simon Boccanegra, the Doge of Genoa, and Amelia Grimaldi is one of the most beautiful pieces of music that Verdi composed.

In the opening section, the orphaned Amelia describes her childhood to Boccanegra and the melancholy minor key melody gives an impression of her early loneliness. The music grows more agitated as she recalls more details about her past. Then, as she remembers her nurse blessing and praying with her, the music shifts into a more optimistic major key. Boccanegra meditates on Amelia’s words and wonders if his cherished dream may become reality.

Family relationships of all kinds fascinated Verdi in his operas and wrote wonderful duets for father and daughter, soprano and baritone pairings. What sets the Boccanegra/Amelia duet apart from others in Aida, La traviata and Rigoletto is the joyous emotions that the music celebrates – a rare example for Verdi of a father and daughter at peace with each other.

Why is Amelia telling Boccanegra about her life, and what is the Doge hoping for? Boccanegra is powerful and successful man, but also deeply unhappy. In the Prologue, we saw the dashing corsair Simon lose both his lover Maria and their daughter, who mysteriously disappeared after her mother’s death. Twenty-five years have passed and Simon has all but given up hope of finding his child. Unknown to him however, the baby girl was found and adopted by the Grimaldi family. Amelia and Boccanegra are finally brought face-to-face when he decides to pardon the exiled Grimaldi brothers. During their subsequent conversation Boccanegra becomes increasingly convinced that Amelia Grimaldi is his child.

The first section of the duet contrasts Amelia’s lyrical, passionate music with a more meditative style for Boccanegra – he hardly dares to acknowledge his hopes. Soon, the Doge’s mood becomes more urgent and the music shifts into accompanied recitative. A restless motif in the orchestra and a quicker tempo conveys Simon’s growing excitement as he questions Amelia. The music reaches a climax as Amelia and Boccanegra realize that they each have a locket containing an identical picture of Boccanegra’s lover Maria Fiesco.

To sumptuous orchestral textures, Amelia declares her love for her father while Boccanegra exclaims ‘embrace me, my daughter!’. A series of rich harmonic modulations lead into the final section of the duet, the cabaletta. This is a celebration of the sheer beauty of the human voice and of singing.

The cabaletta is in a radiant and sunny major key. Boccanegra opens it, with a slightly martial melody which  illustrates the Doge’s status as a noble ruler, who promises to create ‘a paradise on earth’ for his daughter.

The delicate scoring, with pizzicato strings, conveys his tenderness. Amelia responds to fuller orchestral scoring and in a more impassioned style as she vows to bring joy to her father’s house. The pair then sing together, he with his melody from the opening of the cabaletta, she soaring above in long lyrical phrases. As the duet enters its coda, the voices twine sensually around each other as father and daughter rejoice that ‘we shall taste undiscovered joys known only to heaven’. The orchestra rings out with Boccanegra’s cabaletta melody as father and daughter bid each other farewell, Amelia rising to a top B flat, her highest note in the duet.

Verdi produces one final masterstroke. As Boccanegra, ‘in a state of ecstasy’, watches his daughter leave, he sings one last, pianissimo ‘Figlia’, high in his vocal range, to rippling harp chords and shimmering string textures. As Verdi scholar Mary Jane Phillips wrote, ‘with that half-whispered “Daughter” Verdi touches the sublime’. This is surely one of Verdi’s most moving celebrations of the ties between father and daughter, and a rare and exquisite moment of tenderness in an opera full of political and personal turmoil.

Simon Boccanegra runs from 27 June – 16 July. Tickets are still available.
The production is staged with generous philanthropic support from Mrs Susan A Olde OBE, Afiya and Timur Kuanyshev and the Verdi Syndicate.