Rossini introduces us to his heroine Elena as she rows her boat across a loch. 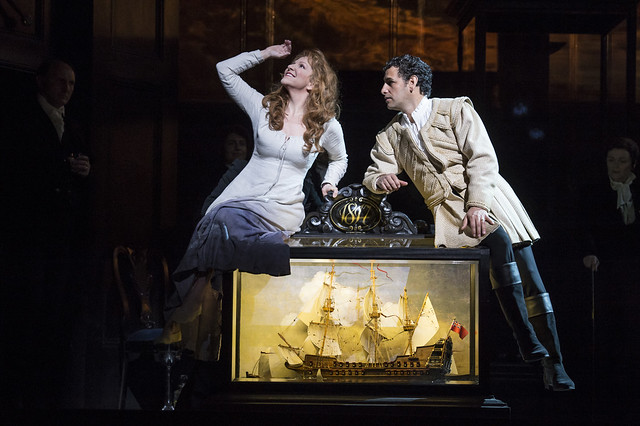 Music plays a big part in the first impression of any new character in an opera. The clues to Elena, the heroine in the title of Rossini’s La donna del lago, are all there in her first song. So what does ‘Oh mattutini albori’ tell us about this Lady of the Lake?

Rossini’s opera La donna del lago is based on Sir Walter Scott’s poem The Lady of the Lake. We first encounter Elena (Ellen in the poem) as she rows a small boat across Loch Katrine from the island where she lives to the shore. As she rows she sings a lovely lilting song, ‘Oh mattutini albori!’ (‘Oh morning rays of sunshine’). Each morning she is aware another day has passed in which she has been separated from Malcolm, the man she loves who is away fighting for the Scottish Highlanders against King Giacomo V (James V).

Elena’s song is a barcarolle, so called after the easy rocking rhythm and flowing melody that is meant to suggest the gentle undulation of the waves as a boat glides along.  Barcarolles are most associated with Venetian gondoliers and what they sang as they worked. You can hear this type of measured pace, rhythm and smooth melody in the well-known folk song ‘The Skye Boat Song’. Sharing associations of country and conflict with La donna del lago, ‘The Skye Boat Song’ recalls Flora MacDonald rowing the escaping Bonnie Prince Charlie over to the Isle of Skye following his defeat at the Battle of Culloden in 1746.

For Rossini’s audience, ‘Oh mattutini albori!’ does three things. First it establishes the landscape through the rocking 6/8 rhythm – early audiences would have known the convention that this style of music meant a boat song. The simplicity of the opening bars of the melody also indicates something naive, honest and rural (in this case, the Scottish Highlands).

Second, it gives the singer of the role the chance to make an impact with her first number. There is a long introduction for us to get used to the style of the music and also get some of the melody imprinted on the ear. When Elena begins to sing we can relax to listen – and also notice just how difficult the part becomes for the singer. This is music to let you know how not just who the character is, but also how good the performer is: the straightforward melodic outline is made very elaborate with decorative flourishes that must be performed effortlessly.

The third thing Rossini did was to have Elena sing offstage to begin with, as though she is on the lake and gradually coming towards us - a common device in opera. Before we see Elena, we have already decided how lovely she is from the music alone.

But there is one more thing about this aria. When Elena reaches the shore she meets Uberto, who is really Giacomo V in disguise. He has lost his hunting party, and she offers him shelter with her family in her island home for the night. As she rows them back they both sing the barcarolle tune, taking turns on the lines. In the final act of the opera, Elena has to go to the King, whose armies have now defeated the Highland rebels to which her father and her lover belong. She wants to plead for their lives. Offstage she hears that barcarolle, and thinks it is Uberto. The shared tune identifies the man she rowed across the lake at the start of the opera. But then she realizes that everyone else treats him as Giacomo V – and his true identity is revealed.    So, Rossini’s simple boat song tells us the setting, introduces the character of Elena, and is an essential part of tying up the loose ends of the plot. Not bad for just one little boat song.

La donna del lago runs until 11 June. Tickets for the performances at Covent Garden are very limited but the opera will be relayed live into cinemas around the world on Monday 27 May.

The production is sponsored by the Peter Moores Foundation and the Friends of Covent Garden with generous philanthropic support from Celia Blakey, Hélène and Jean Peters, Judith Portrait and Susan and John Singer. The Production Director generously supported by Hamish and Sophie Forsyth.