The fiery scene that originally led to the opera being banned sees Donizetti at his most blisteringly dramatic. 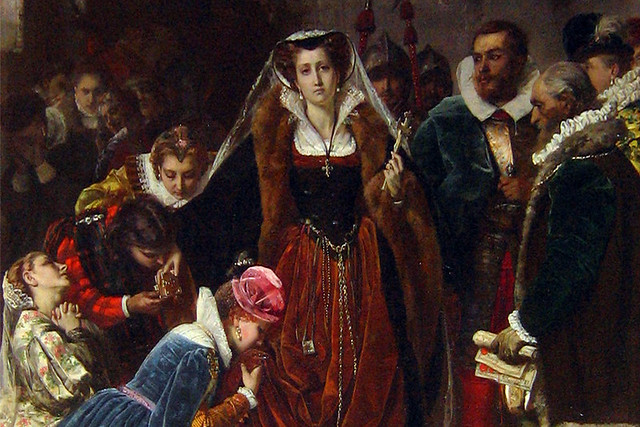 Mary Stuart walks to the Scaffold by Scipione Vannutelli, 1861

'The soil of England, vile bastard, is defiled by the touch of your foot!' That's a line to get you noticed, especially when hurled between royalty, in this case by Mary Queen of Scots at her Tudor cousin Elizabeth I. In Donizetti's Italy it was also a line to get you banned, and Maria Malibran's refusal to sacrifice it at the opera's eventual 1835 premiere at La Scala led to Maria Stuarda being dropped from the repertory, barely to resurface for 120 years.

You can see why Malibran wouldn't compromise. The Confrontation Scene that brings Act I thundering to a close is the only time in the opera the two rival queens share the stage – though 'share' might not be the right word. Donizetti expertly turns the bel canto idiom – as we understand it now, that of placing vocal beauty above all else – to his dramatic purpose, constructing a scene of breathtaking intensity.

The meeting (entirely fictional) has been engineered against the queens' wishes by Leicester, the tenor love interest (his romantic feelings also fictional). It's a classic love triangle: Elisabetta loves Leicester, Leicester loves Maria and Maria loves him. Maria's kindly gaoler Talbot has let her roam the forest around Fotheringhay, where she is incarcerated. Meanwhile, Leicester has steered Elisabetta's hunting party the 100 miles from Windsor to Northamptonshire (made possible through a somewhat fanciful approach to English geography) for this 'chance' meeting.

In the opening recitative section, Elisabetta's nobility, pride and quick jealousy that we saw at the opera's opening is obvious again. Buoyant phrases in the flute give a pastoral sense, but it's undercut by the urgent pulsing in the strings. Elisabetta is caught between Leicester's ardent tenor, urging her meeting with Maria, and her dour baritone adviser Cecil, insidiously pushing Elisabetta towards removing through violence this threat to the English throne. Maria and Talbot arrive and a roll on the timpani pulls us into majestic dotted rhythms from the whole orchestra, leading us chromatically down to an anticipatory dominant 7th chord. From this Maria murmurs a fragile 'O Dio!'. There follows a killer of a dramatic pause.

But rather than an action-packed dialogue, Donizetti has Elisabetta haughtily turn aside and lead the canonic 'È sempre la stessa' ('She's still the same'), where to imitative music all the characters individually reflect on the situation. In short, nothing happens. The delayed action not only builds tension for the onslaught but hints that neither queen is really interested in the reconciliation Leicester so craves.

But now Leicester encourages Maria to start a humble prayer for forgiveness, 'Morta al mondo' ('Dead to the world'), a simple song that recalls her peaceful earlier aria 'O nube! che lieve' ('O clouds that lightly drift'). Elisabetta usurps Maria's lovely melody and takes it for her own, corrupting it with references to Maria's 'betrayed bed' and 'unavenged husband', her 'crimes and betrayal'. Leicester's attempt to comfort Maria only stokes Elisabetta's anger.

Finally Maria snaps. Unaccompanied except for the occasional shocked interjection from the orchestra, she launches a tirade against the queen. Undeterred by Talbot's breathless 'O Dio!', she delivers a series of determined insults, relishing each one, her voice rising higher and ever more exultingly to the final smack in the face.

Then all hell breaks loose, the strings hurrying beneath Elisabetta as she summons her guards, rushing us into the final stretta (the fast closing section for a finale). Here, for the first time in the scene, Donizetti colours the vocal lines with the rapid, decorative notes of coloratura, in a brilliant expression of Elisabetta's uncontrollable anger, Leicester's anguish and Maria's triumphant satisfaction. We hurtle to the close, where a series of decisive chords from the brass bring the curtain down on what is undoubtedly one of Donizetti's finest and fiercest finales.

Maria Stuarda is a co-production with Polish National Opera, Théâtre des Champs-Elysées, Paris, and Gran Teatre del Liceu, Barcelona, and is given with generous philanthropic support from Lord and Lady Laidlaw, Susan and John Singer and Michael Hartnall.