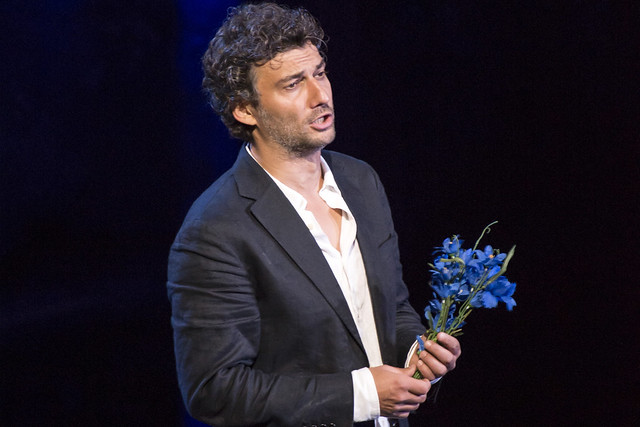 From the first line of this famous tenor aria from Act I of Puccini’s Manon Lescaut we know exactly what this character is thinking: ‘Never before have I seen such a beautiful young woman!’ (Donna non vidi mai simile a questa). The Chevalier Renato des Grieux, who sings it, has fallen head over heels in love with the gorgeous Manon Lescaut. In this lyrical and impassioned solo, Des Grieux thinks how fervent he’d feel telling her that he loved her; her name touches nerves deep inside him; he does not want the memory of her whispered name ever to fade.

Strong stuff! And it needs a musical setting to match – Puccini marked the aria ‘con accento appassionato’. The melody for the first eight bars constantly yearns to rise, shown in slowly ascending phrases punctuated by sudden single high notes. In fact the second highest note of the whole aria – a top A – is reached as soon as the start of the fourth short phrase. This is important, because everything about the music needs to be heightened to reflect the sensation of love that has overcome Des Grieux. What’s more, it was love at first sight – he only met her a few minutes ago!

At the start of the opera Des Grieux was an unattached young man, detached from playing romantic games. He knew nothing of love, dismissing it as a tragedy and a comedy, but he went along with some mock-flirting with a groups of girls. He wasn’t serious, so when he finished everyone laughed. But then Manon Lescaut arrived on the scene, beautiful and unknown. Des Grieux was instantly captivated by her: love at first sight – genuine passion, something completely new to him. So he introduced himself. There is something tentative about the music for his approach as he couldn’t know how she would react. The melody of this introduction becomes the main theme of ‘Donna non vidi mai’.

At their first meeting, he also asked her name, and she replied with a memorable descending phrase to the words ‘Manon Lescaut mi chiamo’ (I’m called Manon Lescaut). The first words she said (sang!) to him lodged in his mind, and so in ‘Donna non vidi mai’ he repeats this phrase – music and words – twice. The first time is quiet and relatively low, starting on an E flat and falling away to the second lowest note in the aria. He is recalling her quiet, shy reply in every detail (the music is marked ‘con semplicità’). But he loses all restraint through the effect she has had on him, and his vocal lines swell in volume and keep rising in pitch – up to a top B flat as he sings of the passion she inspires deep in him. He repeats her ‘name’ phrase, now high and loud, ‘con anima’.

Throughout the aria, the music moves in broad waves from quiet to loud, from low to high in the melody, from quiet orchestration to forceful. It is a musical description of Des Grieux’s release from emotional restraint under the transformative sensations of his instant attraction. The music repeats the same group of phrases and ideas as Des Grieux re-lives this unexpected and intoxicating meeting. The music is slow and stretched out so he can linger in every pleasurable moment. Their short first exchange was enough for him to ask her to meet him again, and for her to say she would, so Des Grieux is also singing with a sense of expectation that she will soon be back!

This aria is not just a wonderfully lyrical and romantic soliloquy, but dramatically sets up the whole story. Des Grieux’s overwhelming love for Manon is so strong he defies all sense and follows her destructive path – ultimately to be taken down with her. But all that is yet to happen. As Des Grieux sings ‘Donna non vidi mai’, he is full of hope, anticipation and an all-consuming passion for Manon Lescaut.