Our quick introduction to this quirky, inventive and moving take on the Orpheus myth by the up-and-coming independent theatre company. 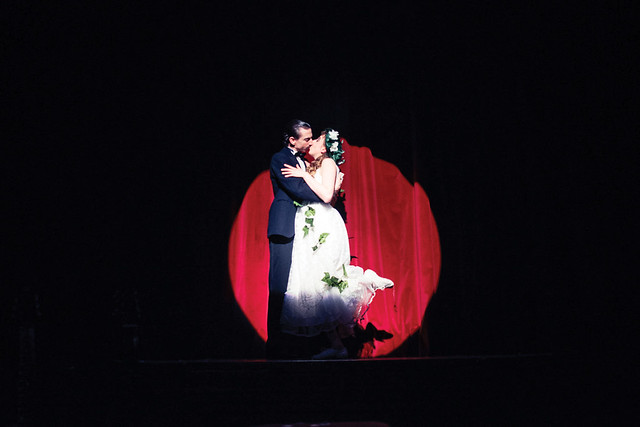 A fledgling opera company in 1930s Paris has bitten off more than it can chew. They’ve blown the budget on an ambitious staging of the Orpheus myth, but the two stars – chanteuse Yvette Pépin (think a prototype Edith Piaf) and guitar genius Django Reinhardt – threaten to derail everything. Will they make it to the end of the show?

Clare Beresford, Dominic Conway and Alexander Scott founded Little Bulb Theatre in 2008. Their debut production Crocosmia had its premiere at the Edinburgh Festival Fringe that year and went on to win the Fringe First, Total Theatre and Arches Brick awards, and they’ve followed it up with a number of highly acclaimed works. Orpheus was commissioned by the Battersea Arts Centre and was developed in collaboration with a number of associate artists. It’s Little Bulb’s largest-scale production yet, and since its 2013 premiere it has toured internationally, including to the Salzburg Festival.

The members of Little Bulb Theatre are determined that for each new show they will each individually learn something new. Orpheus was no different, with many members of the company learning a new instrument from scratch, including clarinet and harp. Meanwhile, Conway was faced with the daunting challenge of portraying both the legendary musician Orpheus and real-life guitar legend Django Reinhardt at the same time, and so intensively retrained as a gypsy jazz guitarist.

Little Bulb Theatre delights in drawing on a vast range of musical sources, and Orpheus is their most musically far-reaching yet. The virtuoso music of Django Reinhardt and hot club jazz is the dominant thread, with French chanson and works by Monteverdi, Saint-Saëns, Debussy, Bach, Fauré and others pulled into the mix, along with original compositions by the company. The smorgasbord is performed by a furiously multi-tasking team of eight.

The Greek myth of the great musician Orpheus, whose song calmed the forces of hell, has inspired innumerable musical works – including the first operatic masterpiece, Monteverdi’s Orfeo in 1607. Conway says of the myth’s enduring appeal to musicians that ‘it’s a story about music and about the power of music… the story is irresistible, and so simple’. Little Bulb’s inimitable take on the myth – which also gently pokes fun at these musicians and the adulation they receive – forms part of an Orpheus year at the Royal Opera House, alongside works by Monteverdi, Birtwistle, Gluck and Rossi.