Mozart was 14 going-on 15 when he wrote this gorgeous, virtuoso aria which displays the beginnings of his mature musical and dramatic insight. 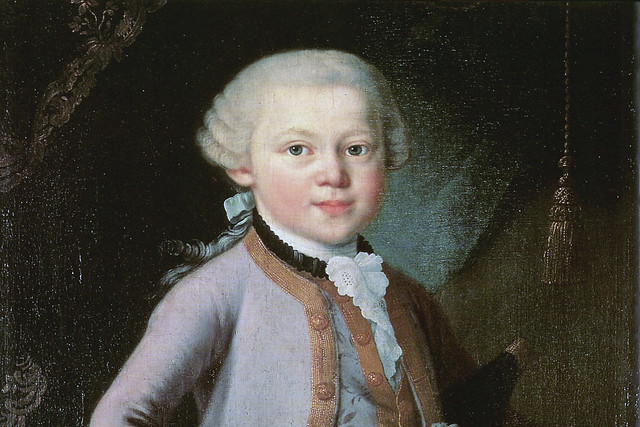 Mozart had reached the grand old age of 14 when he came to write Mitridate and had three operas under his belt already. This was his first opera seria, giving him with the opportunity to try the genre’s conventions on for size. It also brought him head to head with star singers and their many demands. So the music of Mitridate is the young Mozart’s response to these two challenges – but certain movements also reveal the maturing composer’s remarkable genius for emotional truth through music. Sifare’s aria ‘Lungi da te’, from Act II, is one of them.

The story of Mitridate has all the trappings Mozart’s audience would have expected from an opera seria, with its tale of a noble family from a distant time torn between love and duty. ‘Lungi da te’ arises from one such conflict: Sifare and Aspasia have fallen in love, but Aspasia is engaged to Sifare’s father, King Mitridate. To preserve both their honours the prince determines to leave his love, and in ‘Lungi da te’ bids his poignant farewell to a distraught Aspasia.

The first Sifare was Pietro Benedetti, a soprano castrato who gave everyone the jitters by turning up several weeks late for rehearsal. Mozart’s father, Leopold, wrote of how his son was holding off composing Benedetti’s arias as ‘he doesn’t want to do the work twice… it is better to wait until he arrives in order to measure the suit correctly on the body’. There are three different surviving versions of ‘Lungi da te’, suggesting that this Sifare’s third aria needed extra tailoring. (Another Leopold letter indicates the castrato was happy with the results: ‘The primo uomo said that if [his duet with Aspasia] did not please the public, he would have himself castrated a second time.’)

‘Lungi da te’ accordingly allows its singer (now sung by a female soprano or mezzo-soprano) plenty of opportunity to show off. The aria requires extraordinary breath control and a vocal range that happily covers two octaves. Across that range the singer must be able to sing with both agility and lyricism. There are two opportunities for cadenzas, and the ‘da capo’ format, where the opening part of the aria is repeated after a contrasting middle section, demands additional ornamentation. The aria is also written with a striking horn obbligato or solo, allowing the singer’s voice to intertwine and play off a virtuoso soloist from the orchestra.

And yet, as you would expect from Mozart, ‘Lungi da te’ is so much more than a show-off aria. Every element that fulfils the demands of the opera seria genre, or that Benedetti might have made, also serves a precise and effective dramatic purpose. The horn obbligato imparts the aria both a sense of melancholy and a luminous beauty: the sorrow of parting, the sweetness of love. Sifare’s long lines draw this out further, while the wide range and extensive ornamentation enhance both Sifare’s heroic character and the anguish he suffers.

Most striking is Mozart’s response to the text within the da capo structure, in which he uses the obligatory contrasting middle section and repeated opening section to sharpen the aria’s dramatic intention. The middle section is very different from what has gone before: tempo, key and time signature are all changed. In a few short phrases Sifare delivers the text of the second section, firmly telling himself that if he stays with Aspasia any longer he will forget his duty. And then… The music and text of the first part return, Sifare urging Aspasia not to think of the torments she might suffer as he leaves in long-spun and mellifluous music. As he warned himself in the middle section, he has stayed and forgot his duty.

Mitridate satisfied the audience at its 1770 premiere, with the opera famously repeated a further 21 times that season. Now, nearly 250 years on, we can also savour ‘Lungi da te’ and the rest of Mitridate for what it is: an insightful response to the operatic structures of the day from a composer just at the beginning of his remarkable opera journey.