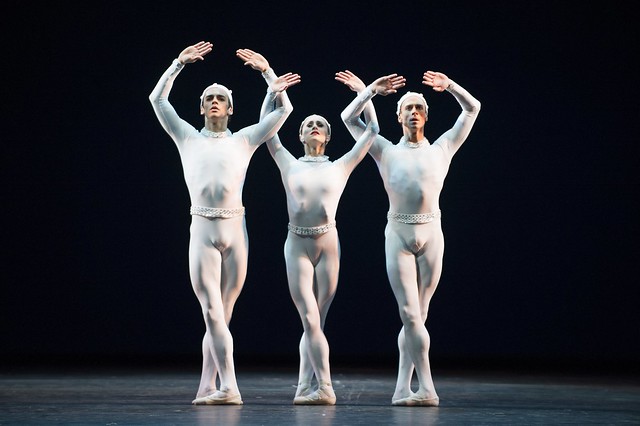 Frederick Ashton created Monotones II for a 1965 gala performance in aid of The Royal Ballet Benevolent Fund. He chose orchestrations of Erik Satie’s luminous Trois Gymnopédies – which had long inspired him – as the score, and used them as the basis of an extended pas de trois for a woman and two men. Ashton derived the structure and steps of the pas de trois from the nuances of the music, and the result is a stream of sublime, poetic choreography – a testament to Ashton’s belief that ‘taking one’s lead directly from the music... one gets the purity of the dance expressing nothing but itself, and thereby expressing a thousand degrees and facets of emotion’.

Composed at the end of the 19th century, the Gymnopédies are often regarded as a precursor to the hypnotic, minimalist music of composers such as Philip Glass, because of their focus on internal musical processes, repetition and subtle variation rather than large-scale progression. This aspect of the music clearly influenced Ashton’s choreography. In the first passage of unison dancing, for example, a sequence comprising a passé followed by a swivel of the body and a step forwards into a low arabesque is performed first towards stage right, then stage left, then again in a slightly varied form: twice towards stage right at double speed before receding slowly back in the other direction. Here, and throughout the ballet, Ashton draws the focus towards minute details, and the choreography ebbs and flows in perpetual motion rather than developing towards any peak.

Ashton reflects the music’s smooth, seamless quality in the way that the trio of dancers relate to one another – almost as if their movements are connected by a magnetic force. For the first reprise of the distinctive opening music (which occurs at the beginning of this video extract), the dancers perform a variation of the original steps – the woman rotated in the splits by the two men – before she is released into the hold of one man. He supports her in a series of posés and a pas de bourrée that is mirrored exactly by the other man, as if he is invisibly linked to the couple. The trio then dance this sequence again, in the opposite direction, before interlacing arms in fifth position as the woman bourrées backwards and the men perform a series of ronds de jambe, their legs seemingly drawn in towards the woman and one another.

Though apparently effortless, the harmony of the dancers’ movements and the mesmeric quality of the choreography in Monotones II rely on fundamental aspects of Ashton’s classical style. The dancers must hit positions with exact precision, maintain suspended balances and arabesques and use expressive épaulement in order to become the trio of ‘heavenly bodies’ that Ashton envisaged.

When this is achieved, the calm flow of the dance is such that simple choreographic ideas and variations – either in accordance with moments in the score or, occasionally, danced across the music – can be used to riveting effect. Take, for example, the first time the men lift the woman, holding her high above their heads in a sitting position, arms in 5th – this moment of stillness and the new eye level are very striking. And towards the end of the piece, when she is left on her own for the first time and the trio suddenly begin to cover a much wider area of the stage, running from one diagonal to the other, it seems that the choreography might head in a new direction altogether.

Soon, though, the dancers ebb back into their tight grouping. With their arms on one another’s shoulders, they perform a simultaneous rond de jambe, and the woman slowly offers out the palms of her hands. As the lights fade, it is as if the dance could go on an on…

Monotones I and II appears in The Royal Ballet’s mixed programme with The Two Pigeons 18 November–5 December 2015. Tickets are still available.