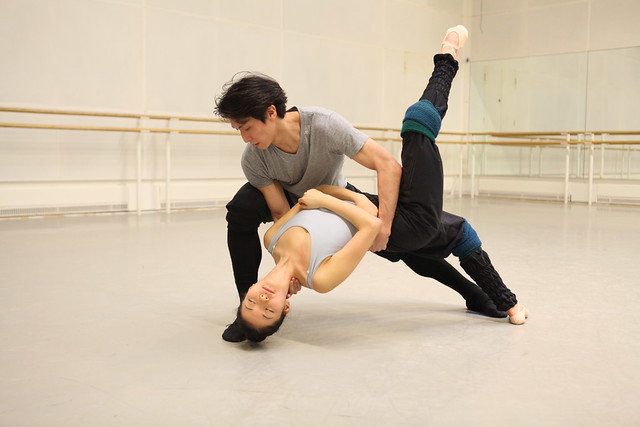 We caught up with Mayuri at the start of rehearsals to find out more:

What has inspired your forthcoming works?

Ex nihilo is inspired by the ‘Hymn of Creation’ – one of the oldest in a collection of sacred hymns in the ancient Rigveda. It considers moments long before the Big Bang and the creation of matter. The poetry of the hymn is marvellous and I was attracted to its abstract imagery and mysticism. The dance is an expression of some of the ideas contemplated by the Vedic sages.

The Human Edge takes its cue from the Hindu story of Sati, the first goddess who appeared at the mythological moment of creation as embodied energy. The choreography draws on the drama of Sati’s life, and her self-annihilation, a metaphor for the life cycle of stars.

Bharatanatyam informs much of your choreography. Can you describe the style?

Bharatanatyam originated in the state of Tamil Nadu and is the oldest Indian classical dance style that evolved in the sacred environment of the temples of South India. It uses the body as a form of expressive geometry, like triangles flowing in three dimensions. It has a codified movement language, and a rich and extensive vocabulary - 28 single hand gestures, 24 double hand gestures, 4 neck movements, 8 movements of the eyes, and so on. It can be physically distinguished from other Indian classical dance forms by its specific deep bend of the knee, which pushes out to the sides; it is similar to a ballet plié but more geometrical, and is sustained during some movements of the dance.

What other styles of dance influence you?

I am influenced by both ballet and contemporary dance; both have helped open up my own style and given me tools and ideas to work with. Last year I saw Marianela Nuñez and Thiago Soares in Onegin and Edward Watson in The Metamorphosis, and I found the physicality of their performances breathtaking. However, I always go back to classical Bharatanatyam when I want to know how to express an idea. It is my touchstone.

Yes. Bharatanatyam is a living, evolving dance form and anything is possible depending on the choreographer’s imagination. For Ex nihilo I am using an installation of sound recordings by Bill Fontana. They range from recordings that have captured sounds such as the birth of particles from inside the Large Hadron Collider at CERN in Geneva, where scientists reproduce and measure the conditions that existed a billionth of a second after the Big Bang, to recordings from the desert in Abu Dhabi, and an old woman from New York reciting her own take on The Book of Genesis.

In contrast, the music for The Human Edge is composed by MIDIval Punditz, long-term collaborators of mine who specialize in synthesizing classical Indian instruments with electronica. Their music aims to brings emotion to the concluding part of the programme and a harmonizing influence after the abstraction of Ex nihilo.

You have previously worked with Fumi Kaneko, Yasmine Naghdi, Sander Blommaert and Nicol Edmonds. What is it like working with Royal Ballet dancers?

Royal Ballet dancers are highly disciplined and have an extraordinary physical ability that I can use to push the movement material I give them. It is very interesting to see how the physicality of non-Bharatanatyam trained dancers can help power the language in a different way. I think they have found the dance form a little alien, but it is amazing to see how they transform the movement into something completely new.

Yuhui and Kenta are consummate classical artists and it's exciting to be working with some of the best dancers in the world.

Ex nihilo/The Human Edge will be performed on 29 and 30 April 2014. Tickets are still available.
The bill is a co-production with The Royal Ballet Studio Programme.