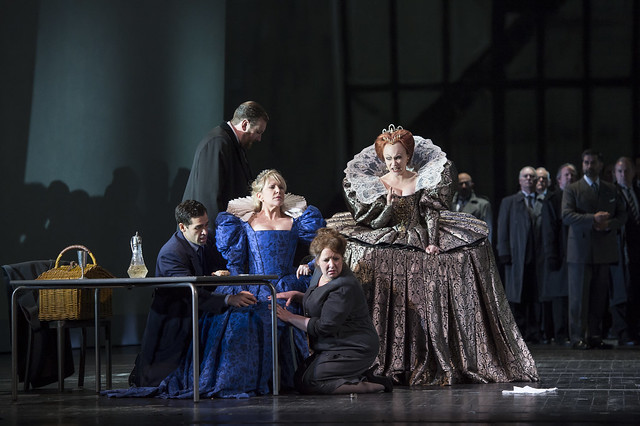 Patrice Caurier and Moshe Leiser's production of Donizetti's bitter tragedy Maria Stuarda will be broadcast live by BBC Radio 3's Opera on 3 on 14 July at 7.15pm.

Donizetti's political drama, which is based on Friedrich von Schiller's 1800 play Maria Stuart, depicts a fictitious meeting between Elizabeth I and Mary, Queen of Scots. Donizetti adds a romantic dimension by having Leicester fall in love with Maria. The score contains some of the composer's most moving music and provides a vocal showcase for the two lead singers. Famous pairings for the regal cousins include Joan Sutherland and Huguette Tourangeau, both of whom starred in the first production of Maria Stuarda at Covent Garden in 1977. Find out more in our Opera Essentials series.

It is a co-production with Polish National Opera, Théâtre des Champs-Elysées, Paris, and Gran Teatre del Liceu, Barcelona. It is staged with generous philanthropic support from Lord and Lady Laidlaw, Susan and John Singer and Michael Hartnall.