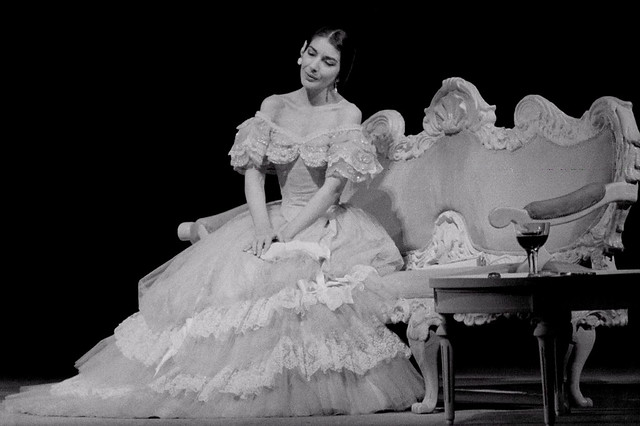 A free exhibition celebrating the career of renowned soprano Maria Callas is now open in the Cloakroom Corridor at the Royal Opera House.

Maria Callas and The Royal Opera commemorates the 60th anniversary this year of Maria Callas’s debut with the Covent Garden Opera Company on 8 November 1952. Callas's costumes are comparatively rare as few seem to have survived, and so the Royal Opera House is fortunate to have two in its Collections as well as some accessories.

The costumes on show span Callas’s appearances here, and include the blue and white Norma costume worn for her London debut in Norma in 1952. Also included is the iconic red dress first worn for the new production of Tosca in 1964, in which Callas sang as Tosca alongside Tito Gobbi as Scarpia. Directed by Franco Zeffirelli, it is hard to convey just how successful this production was. Callas was so nervous on the opening night, that the director had to forcibly push her onto the stage. The production was recreated in other countries and the images of Callas in the red dress are some of the best known of all the photographs taken of her. Tosca was also the last role she sang at the Royal Opera House in 1965, and so this costume is the last one she worn on stage here. Find out more trivia about Callas's appearances in Tosca.

The Exhibitions team has also installed an exhibition to commemorate the centenary of the birth of legendary conductor Georg Solti. The exhibition Georg Solti and The Royal Opera, which is part of worldwide celebrations to mark the Solti 100, also opens on Monday and is free to visit.

Exhibitions can be visited for free during normal daytime opening Monday-Friday, 10am–3.30pm. Before making a special visit, please call +44(0)20 7304 4000 to check that the front of house spaces are open. It is also possible to book guided tours of some of our most special exhibitions. Visit our Exhibitions page for further details.