We look at a handful of the gorgeous arias composed for this charming, capricious heroine. 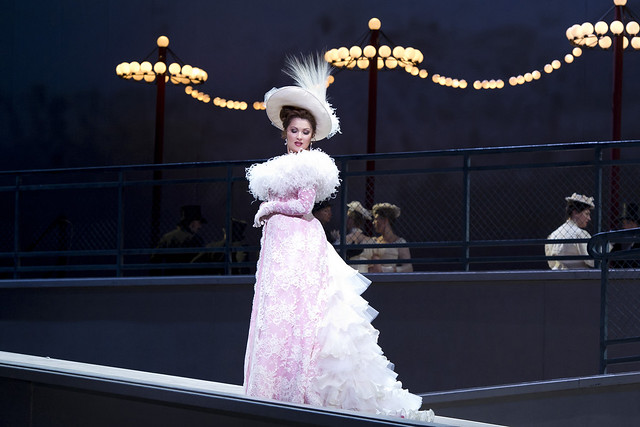 The title role of Massenet's exquisite opera Manon is one of the greatest lures for a singing actress. It's a veritable honeypot of great tunes, great duets and buckets of emotion, with the added bait of interpreting a heroine who is not as bad – nor as good – as she might seem.

Massenet's heroine makes this opera. Through the music, Manon is elevated from the coquettish, bad-girl role she has in the Abbé Prévost's novel that inspired the opera. In Massenet's hands she becomes an enigmatic woman full of ambiguities: cruel, selfish and superficial on one hand; but on the other sincere, joyous and – crucially – deeply sympathetic.

We first meet Manon with her Act I aria 'Je suis encor’ tout étourdie' (I'm still completely dizzy), on the first journey she has ever taken beyond her home town. Massenet weaves a lilting, almost reeling line for his heroine, in which the short phrases seem punctuated by gasps and bursts of hysterical laughter. It conveys Manon's exhaustion, her shy confusion over her cousin Lescaut's bawdy insinuations – but also her wide-eyed excitement at the discovery of a world beyond her family.

This ingenuous quality stays with Manon throughout the opera – perhaps nowhere more so than in 'Adieu, notre petite table' (Farewell, our little table), one of the opera's most treasured moments. Manon realizes that she can't fight the temptation of an easy life offered by a wealthy man. Looking around the tiny room she has shared with Des Grieux, her true love, she bids farewell to their humble life together. She sings a simple, limpid melody over a spare, shimmering accompaniment that grows and ebbs with her sorrow – building to an anguished outburst when she finally acknowledges Des Grieux himself, her 'pauvre ami', and how much he loves her. Her actions are selfish, yes, but her sorrow at leaving Des Grieux is genuine and profound.

But Manon still gets to reap the rewards of her decision. In Manon's Gavotte in Act III scene 1 we see her merrily ensconced as the darling of Paris. Massenet draws on the rapid, easy high notes of coloratura – the ultimate operatic show-off music – to depict a woman who is the centre of attention and loves it. In the Gavotte's stately rhythm Manon relishes her control over the male chorus, who are absolutely in her thrall. But sincere delight radiates from Manon throughout the aria, such that you can't help but be charmed.

In the scene that follows, Manon uses the confidence and power she displayed in her Gavotte to devastating effect in the irresistible seduction of 'N'est-ce plus ma main' (Isn't this my hand?). Manon has heard that Des Grieux is entering the priesthood. Realizing she can't live without his love, she dashes to the church and desperately presses her hand against his. Once again Massenet drops the accompaniment to the very bare bones, giving Manon free rein. Her soaring, urgent melody guarantees that she charms the audience and, eventually, Des Grieux.

Manon ultimately meets a miserable end; broken by the harsh cruelty of prison she dies of exhaustion in Des Grieux's arms. It doesn't feel like just comeuppance, but rather the unbearably tragic snuffing out of a young life – particularly in the limpid pathos of their final duet, 'Tu pleures!' (You're crying!).

Is Manon thoughtless, shallow, and selfish? Undoubtedly – but Massenet's music makes you embrace her despite her faults. That you care – that it hurts – is down to his music, and the dramatic power of the starring soprano.