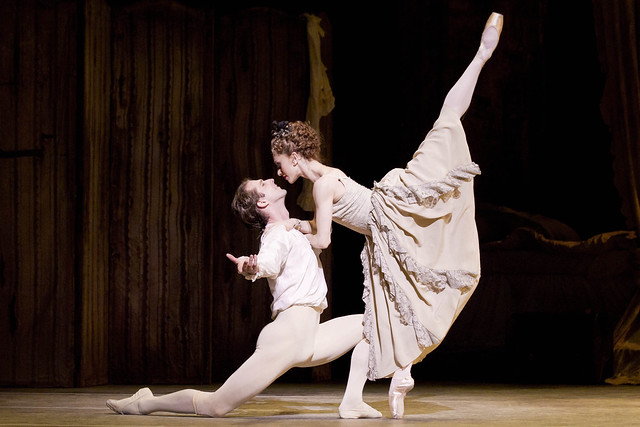 The most anticipated moments in Kenneth MacMillan’s masterful Manon are, for most of the audience, the four central pas de deux danced by the lovers Manon and Des Grieux. MacMillan choreographed these sections of the ballet first, and Antoinette Sibley – the dancer who created the role of Manon – recalled how MacMillan was 'on top of himself, like a Mozart or Beethoven’. The pas de deux give a heartbreaking portrait of ill-fated love.

The first pas de deux occurs soon after Manon and Des Grieux meet. He has just wooed her with a yearning solo adage and takes her hands, inviting her to follow him. At first she timidly bourées towards him while he walks gingerly around her – but the second he spins her into his body it is as if their burgeoning love and desire washes over them. To Massenet's haunting ‘Élégie’ from Les Érinnyes they dance with a sense of exhilaration, Des Grieux sweeping Manon off her feet as she literally walks on air. As the pas de deux develops she responds to his attentive, adoring touch, allowing him to support the weight of her body in ever more daring lifts. Their movements become faster and more urgent – interspersed with moments of repose as they stare, enraptured, into one another’s eyes.

The next, and most famous, pas de deux takes place in Des Grieux’s Paris lodgings. Des Grieux writes a letter as Manon lounges on their bed. She rises and goes to him with her signature, coquettish walk on pointe – a marked change from her earlier coyness. Bouréeing backwards, she lifts her arms seductively above her head and draws him towards her. Their first interactions are flirtatious and playful, danced to music from Massenet’s opera Cendrillion. Quickly, however, the simmering desire seen in their first duet returns. Des Grieux lowers Manon gently to the floor as she circles her wrists; her upper arms – an area Sibley once called Manon’s ‘special erotic zone’ – seduce him. The wistful looks of their first meeting evolve here into a passionate kiss, and their dancing becomes increasingly torrid and demonstrative. Finally Des Grieux throws Manon to the floor and dives down beside her in a surge of love and adoration.

In the third extended pas de deux, Des Grieux and Manon have just escaped to his bedroom from her new partner Monsieur G.M. and the party at the hôtel particulier. Des Grieux has clearly forgiven Manon, and he sweeps her lovingly off her feet. Suddenly he notices her jewelled bracelet – a jolting reminder of her life with G.M.. While he begs her to remove it, she flicks her wrist in port de bras that echoes her previous seductive movements, but which now seems almost intended to taunt him. The ecstatic abandon of their earlier duets is replaced by tension; rather than Manon melting into Des Grieux’s arms, they lean out against one another’s weight, she torn between her love for him and the riches of her new life, and he between his devotion for her and the pain of what she has done. Eventually he rips the bracelet from her arm and flings her to the ground – but then despairingly clutches her to him.

The final pas de deux takes place in the New Orleans bayou, with Manon and Des Grieux on the run after escaping from the prison colony. Des Grieux tries to rouse the exhausted Manon, lifting her to her feet; she attempts to bourée as before, but her body is limp and wearied. They dance together to the rapturous ‘Extase’ from Massenet’s La Vierge but, though their steps recall the earlier pas de deux, Manon’s once beguiling, nuanced port de bras is replaced with drooping wrists and elbows, and she now dances in total physical submission to Des Grieux. In a moment of passion, she runs to him and he holds her adoringly aloft as she stretches one arm skywards. But this strength and lucidity doesn’t last. Des Grieux’s attempts to revive her become more and more desperate until he collapses to the floor. When he next tries to lift her, she does not respond. The heartbreaking truth becomes clear – Manon is dead.

The production is staged with generous philanthropic support from Celia Blakey, Peter Lloyd and The Royal Opera House Endowment Fund. Original Production (1974) made possible by The Linbury Trust.