Kurt Weill thought this one of his best pieces, but it was decades before the controversial scene would be performed. 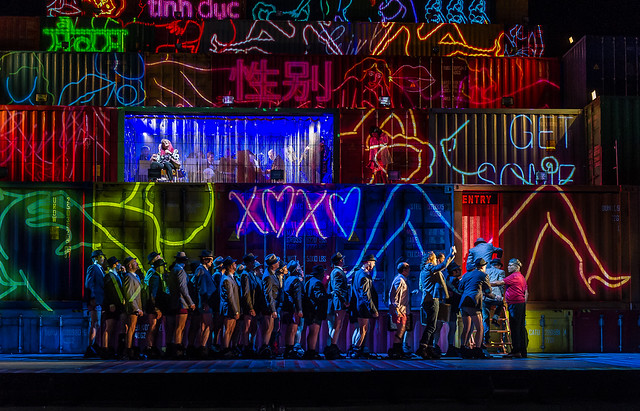 Production photo of Rise and Fall of the City of Mahagonny © ROH.Clive Barda 2015

Kurt Weill finished the score for Rise and Fall of the City of Mahagonny in April 1929 – six months before the Wall Street Crash. A year earlier, he and Mahagonny librettist Bertolt Brecht had had a fantastic popular success with The Threepenny Opera, which had taken the German theatre world by storm. But to convince one of the state subsidized opera houses to perform a work of Mahagonny’s uncompromising nature at a time of such political and economic turbulence would be a different challenge entirely.

Weill made several cuts on the advice of his publisher Emil Hertzka to soften the work’s aggressive satire (though the eventual premiere still provoked a riot). One of Weill’s greatest sacrifices was the Mandalay Song, and he felt its loss bitterly. He wrote to Hertzka that the published piano score ‘must include the original version of the scene, for it is one of my best pieces, and it is only owing to the initial lack of understanding and cowardice of theatres that it cannot yet be played’. So why did the Mandalay Song inspire such trepidation?

By this point in the opera, the denizens of Mahagonny have escaped destruction by hurricane and have determined a new law: ‘Everything is permitted.’ First is eating (Brecht wrote ‘fressen’ – stuffing your face). Second is sex, where the Mandalay Song comes in. Third is boxing, and fourth boozing. Four scenes demonstrate these cardinal needs: one character eats himself to death, another is killed in a boxing match, and the hero is sentenced to death when he is unable to pay his bar tab. As it happens, nobody dies in the Mandalay Song – but the image of a bunch of johns impatiently waiting for an available prostitute was enough to convince Hertzka that, unless it was cut, Mahagonny would never be staged.

The song is played by a small ensemble of three saxophones, three violins, banjo, piano and drum kit. As so often in the opera, Weill channels the popular music of his day and writes a slow foxtrot with a steady, relentless beat and the sinuous feel of a tango. After the agitated drive of the scene’s introduction, the main theme of the Mandalay Song soars out cool and lugubrious. The saxophones croon this mournful, yearning melody, while dry accompaniment from piano, banjo and drums mercilessly ticks out the time of unfulfilled waiting.

Weill breaks up the song’s main theme with interjections from Leocadia Begbick and Trinity Moses, apparent managers of the sex racket. To jaunty accompaniment, Begbick instructs the men to spit out their gum, wash their hands, and to speak a few words to the girls. She’s echoed by the men after each of her interjections, but both times their anxiety soon transforms Begbick’s theme into an impatient chant that quickly returns to the mournful key melody. Moses commands more of a big band feel, as he tells the men their ‘patience is valued’; his second interjection is the song’s most animated section, jazzed up with rapid syncopated movement. But even he is always undercut by that steady implacable tick of time passing, of permanent languor. Finally the melody of sad yearning takes over – but, unable to sustain itself, it soon weakly dies away.

This picture of limp, impotent yearning is quite different from Brecht and Weill’s other Mandalay Song, in Happy End. This earlier version shares the same image of men waiting for the customer inside to finish, but is sung as barroom entertainment and bursts with coarse, impatient energy. The listless Mahagonny Mandalay is another mockery of man’s desire – made all the more stinging for its feebleness.

The production is given with generous philanthropic support from The Kurt Weill Foundation for Music, Inc., New York, NY, Stefan Sten Olsson, Richard and Ginny Salter, Hamish and Sophie Forsyth and the Royal Opera Circle.