Mad for it: Director Katie Mitchell on her new Royal Opera production of Lucia di Lammermoor

The director discusses her vision of Donizetti's opera as a tale of drama, jeopardy and feminism. 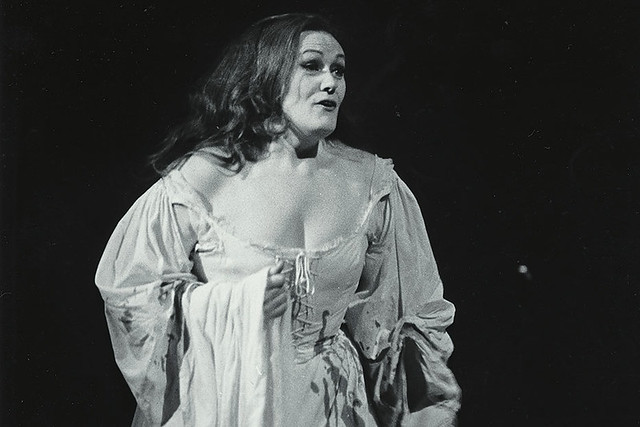 ‘The male characters in Lucia di Lammermoor are on stage a lot, their psychologies are well drawn, they’re complex and thrilling and interesting,’ says director Katie Mitchell. ‘My beef with the piece is that there just isn’t that same degree of attention and thoughtfulness in the drawing of the female characters. There are scenes that seem to be missing. So my production will try to fill in some of the gaps in the central character’s story. It will balance things out.’

After the success of her eerily beautiful main-house staging of George Benjamin’s Written on Skin (first seen at Aix-en-Provence), and her ROH2/Linbury Studio Theatre productions of James MacMillan’s pieces Clemency and Parthenogenesis, to say that Mitchell’s take on Donizetti’s 1835 opera Lucia di Lammermoor is eagerly awaited is something of an understatement – all the more so as it will be her first production to receive its premiere on the main stage at Covent Garden.

In addition to the presence of the most sought-after Lucia of the moment – Bavarian soprano Diana Damrau – there’s also an intriguing spice of controversy to the project: Mitchell has her detractors as well as supporters, and her English National Opera piece After Dido, a film/live action staging of Purcell’s Dido and Aeneas, which shelved the original plot and grafted on three separate but simultaneous contemporary narratives instead, proved to be a real Marmite moment.

By the time we talk, Mitchell and her regular design collaborator Vicki Mortimer have already given their Lucia model-showing, so, although rehearsals are some way off, the bones of the staging are firmly in place. One adjective about the production that has been much whispered on the operatic jungle drums is ‘feminist’. So when I speak to Mitchell, I feel I have to grasp the nettle from the get-go and ask: is this indeed going to be ‘a feminist Lucia’, or is that descriptor a mere piece of journalistic laziness?

Mitchell is a thoughtful interviewee and chews on the question for a few moments. ‘If feminism is a political movement about equality then, yes, you could say that this interpretation will favour a feminist viewpoint. I want to find ideas that support the movement of the drama, but fill in the gaps in the female narrative in a dynamic way.’

Could she give me an example of the kind of gap she means? ‘There’s something about the tradition of a singer in her thirties or forties playing a 19-year-old Lucia that, for me, is very mixed-messagey,’ she says. ‘So I want to free us up a bit there. The character of Lucia will be represented as a woman in her early forties, who has very much accepted that she’s never going to be married. And I want to make sense of that as a good story, a positive story. When she falls in love with Edgardo, and she experiences the erotic for the first time, it’s an enormous shock and surprise to her system.’

Mitchell has chosen to set the story in the mid-19th century, to reflect the era of the opera’s composition. ‘Unmarried women often found other ways to channel their energies. It was a period of brilliant female artists – just think of the Brontës or George Eliot. Or of other women who were fossil-hunters, or scientists.’

How is such a gap in Lucia’s back-story going to be filled? ‘My concept is to create a split-stage, in which there will be lots of different simultaneous environments. In the first scene, the main action, the sung action, will show Normanno [the captain of the castle guard] describing the search for the lovers – but we will also see Lucia and her maid sneaking into her brother’s bedroom to try on men’s clothes in order to disguise herself. She’s in a threatening situation, and she mustn’t be recognized going to meet her beloved Edgardo, whom her brother hates; she doesn’t just waft down in her normal clothing. I want to show scenes like that, which raise the IQ and agency of Lucia. Those are the sort of gaps I mean.’

Thinking of the theory of the mask, and the questions raised by the nature of disguise, I ask if Lucia’s cross-dressing implies some examination of a masculine side to her character? ‘No, that would be crude and nasty. Her wearing men’s clothes is a one-off thing to avoid danger, so that she won’t be noticed.’

Are there other gaps that Mitchell would like to see filled? ‘We need to understand why Lucia goes mad. There’s a missing scene, rather like in Hamlet, where we don’t see how Ophelia goes mad. It’s the same with Lucia: we see her sane, then insane. We’ll fill that gap here as well. After all, if on your wedding night you took a sharp implement and tried to kill a very strong man, and it went horribly wrong – not like in the movies, where a knife just pops in and out, but it’s a complete bloody mess – it’s enough to unsettle anyone. We’re going to see all of that.’

That leads to a debate about the nature of Lucia’s madness, doesn’t it? ‘Absolutely. Are we looking at long-lasting psychosis, or at someone who just flips out for an evening? There’s a huge spectrum of mental disturbance, from someone clinically insane through to someone profoundly shocked and destabilized, and I think it’s the trauma of murdering that fuels Lucia’s instability. I want to put some psychological steps in place so that we really understand her mental state in the so-called “Mad Scene”.’

A lot has been written about why women die in 19th-century operas. What are Mitchell’s thoughts on the matter? ‘It’s a cultural problem that we’ve inherited, seeing all those women repeatedly die or go mad.’ she says. ‘If it were matched by the equivalent number of dead and mentally disturbed men, I’d be happy as Larry. But it isn’t. So we have to be a bit more rigorous now about how we think about it and how we represent those 19th-century heroines. We can’t just glamourize them, or leave them unexamined. Just because there are beautiful sounds, they can’t be immune to scrutiny.’

Mitchell then talks some more about the thrill of working on such a ‘gorgeous and iconic’ score, and how pleased she was to be offered the project by Kasper Holten. ‘It was irresistible,’ she says with uncontained glee. But then she offers me some advice (an offer I’m surprised that more interviewees don’t make). ‘Do be careful when you write about the production not to reduce it just to the feminist take, because it sounds like that’s your angle and it would be a pity. Because, feminism aside, this is a fantastically well-made drama, which really moves with a lick and has lots of jeopardy in it. All the choices we’re making will support the story and hopefully nudge it into more of a thriller genre. I don’t want to do anything reductive, or simplifying. I want to fill in the female narrative in a dynamic and exciting way.’