The great 20th-century choreographer broke all kind of taboos, including depicting death and loss – creating some of ballet’s most moving, and uplifting, works. 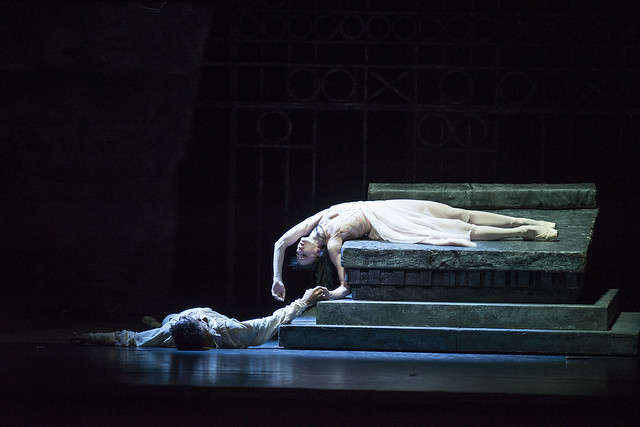 Carlos Acosta as Romeo and Natalia Osipova as Juliet in Romeo and Juliet, The Royal Ballet © ROH/Bill Cooper, 2013

‘Whatever I have done, I have always felt a rebel.’ Pushing the boundaries of classical ballet to confront the gritty realities of the human condition, Kenneth MacMillan breathed new life into the art form, and created some of its most treasured masterpieces. Among the many taboo topics he dared to explore, death – and its effect on those left behind – recurs time and again.

This focus is perhaps unsurprising, given MacMillan’s personal experiences. His mother suffered chronic epilepsy, and died in 1942 when he was just 12 years old. In 1946 his father died of pneumonia, and 13 years later his sister Jean was killed in a car crash. Losing those closest to him was a recurring theme in MacMillan’s life – and death a preoccupation in his work.

Some of the choreographer’s most poignant depictions of death occur in his narrative ballets. The famous endings of his Romeo and Juliet (1965) and Manon (1974) illustrate the hopeless anguish of their male protagonists at the passing (whether real or artificial) of their beloveds. In both instances, they cling desperately to their partners, painfully dragging them through steps that recall their previous pas de deux. Earlier in Romeo and Juliet, Lady Capulet’s gut-wrenching reaction to the death of her nephew Tybalt is portrayed more naturalistically – illustrating the pain of loss with vivid and harrowing understanding.

Mayerling, MacMillan’s 1978 ballet based on the true story of Crown Prince Rudolf and his teenage mistress, presents death from a very different perspective. Here, it pervades every aspect of the ballet. Rather than causing anguish for the protagonists, death is an obsession – even a fetish – building towards the frenzied pas de deux that ends in their nightmarish double suicide.

MacMillan also created several one-act ballets that consider the end of life with more optimism. The choreographer’s own summary of his 1965 Song of the Earth was ‘A man and a woman; death takes the man; they both return to her and at the end of the ballet, we find that in death there is the promise of renewal.’ Set to, and inspired by, Mahler’s Das Lied von der Erde, the work illustrates death not as an evil force but as a gentle, ever-present figure. As the curtain falls, the couple walks hand-in-hand with The Messenger of Death towards eternity, accepting their fate with a sense of calm inevitability.

Requiem – a tribute to MacMillan’s friend and colleague at Stuttgart Ballet, John Cranko – addresses the agony of loss but again depicts death with serenity. The 1976 ballet was created on the Stuttgart company, whose torment is expressed by a huddle of dancers who begin the ballet drumming their fists with rage, mouths wide open in silent screams of grief – and by a solo woman who suffers with them. However, as Fauré’s sacred score unfolds, there are sublime moments of optimism – such as the woman’s solo to the ‘Pie Jesu’ – and at the end of the ballet the dancers gather round a pool of glowing light as if witnessing the transfiguration of a soul to heaven.

Even in Gloria – which was inspired by Vera Brittain’s World War I-set Testament of Youth – MacMillan finds ways to affirm life amid the horror of death. There is suffering in the work: the male dancers are dressed in costumes that recall blood-stained soldiers’ uniforms, and the choreography features awkwardly splayed limbs and hands covering faces in grief. But MacMillan introduces a sense of transcendence and joy amid the sorrow – particularly with the angel-like female dancers.

Through these and other works, MacMillan confronted a topic that choreographers before him avoided. He gave ballet a voice on this crucial human experience – both its pain and anguish, and the power of hope through life.

The production is supported by Boodles and staged with generous philanthropic support from Peter Lloyd, Lindsay and Sarah Tomlinson and the Jean Sainsbury Royal Opera House Fund.