One of all opera's most dramatic scenes, this beautiful and complex ensemble is perhaps Donizetti's finest moment. 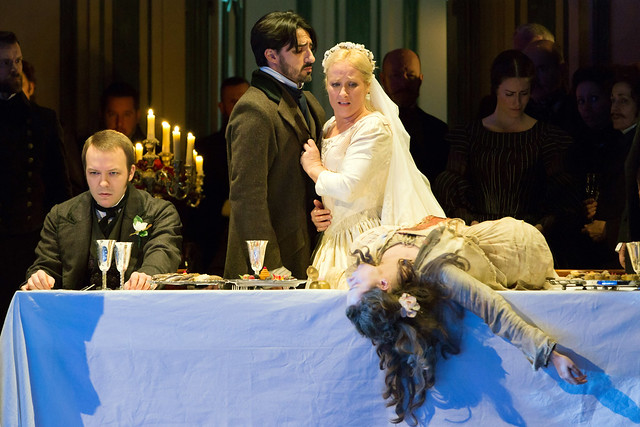 Donizetti’s Lucia di Lammermoor is perhaps best-known for Lucia’s Act III Mad Scene – but the Act II sextet ‘Chi mi frena in tal momento’ is almost as famous. It was rapturously applauded at the opera’s premiere, went on to influence such composers as Verdi and was one of the first ever opera ensembles to be recorded. Its fame is easy to understand: the sextet, and its ensuing finale, are archetypal examples of beautiful, complex music used at a crucial dramatic turning point.

Shortly before the sextet begins, Lucia has been tricked by her brother Enrico into believing her lover Edgardo (Enrico’s sworn enemy) is unfaithful; Enrico forces her to marry his political ally Arturo. The moment Lucia signs the wedding contract she feels a terrible foreboding, highlighted by dramatic orchestral tremolos. She is right to do so – seconds later, Edgardo bursts in, interrupting the wedding party and briefly shocking everyone into silence.

The sextet opens with a duet between Edgardo and Enrico, in which Edgardo expresses pity and enduring love for Lucia, and Enrico expresses remorse for his treachery. The men’s closely linked vocal lines show how, for the first time, these two enemies are united in compassion. Lucia then takes up the melody, shadowed by the chaplain Raimondo. Lucia is too unhappy even to weep; Raimondo fears an evil end to the day, and pities her. Meanwhile, Edgardo and Enrico reiterate their feelings in short asides. The sextet grows richer in texture and the range of emotions expand as we discover each character’s reaction to the shocking event.

The textures become richer still as the chorus join in (doubled by Arturo and Lucia’s companion Alisa – in terms of solo lines the sextet is really a quartet), expressing fear and pity for Lucia. As the emotional temperature rises, Lucia’s increasingly broken phrases and anguished repeated high notes show her deepening distress. This heightens still further in the sextet’s closing bars as – following a short unaccompanied passage for her still-remorseful brother and lover – she soars to her highest note in the sextet, closing the ensemble in a mood of profound despair.

In the ensuing section – a bridge between the sextet and the finale – the male characters’ energy and purpose returns, with steady figures in the strings providing a sense of constant momentum. Arturo and Enrico square up to their old enemy Edgardo, who vows not to leave without a struggle. Raimondo breaks in, reminding everyone to slow, majestic chords that ‘God abhors murderers’. He shows Edgardo Lucia’s wedding contract. With cold dignity, Edgardo asks Lucia if she signed it. Lucia quietly answers ‘yes’. In a dramatic unaccompanied phrase, Edgardo declares that Lucia has betrayed both Heaven and love.

The musical tension rises almost unbearably in the ensuing rapid finale. Edgardo repeatedly curses Lucia in a high-lying, declamatory line; she can only respond with a wordless cry to his furious ‘May God destroy you!’. The chorus, Enrico, Raimondo and Arturo launch into the stretta (rapid concluding passage, here in the rhythm of a fiery tarantella), repeatedly ordering Edgardo to leave. In a poignant aside, Lucia and Edgardo sing lyrically in unison, Lucia praying for Edgardo’s safety, Edgardo longing for death. Their lamentations soar above the chorus’s furious denunciations as the finale speeds to its frantic end, closing with a final high-pitched cry of anguish from Lucia.

Lucia di Lammermoor’s Act II sextet and finale is both the most musically complex section of the opera, and a moving and convincing depiction of a range of passionate emotions. It is also the opera’s dramatic lynchpin. Everything that happens in Act III – Arturo’s murder, Lucia’s collapse and subsequent death and Edgardo’s suicide – are a direct result of this scene’s action. No wonder it is cited as one of Donizetti’s greatest achievements.