Listen: The Importance of Being Earnest – ‘I think it would make other types of music laugh’ 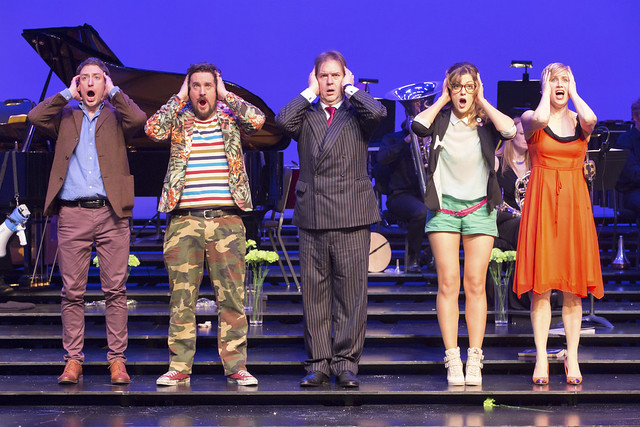 Paul Curievici as John, Benedict Nelson as Algernon, Alan Ewing as Lady Bracknell, Claudia Boyle as Cecily and Stephanie Marshall as Gwendolen in The Importance of Being Earnest, The Royal Opera © 2016 ROH. Photograph by Stephen Cummiskey

Gerald Barry’s 2011 opera The Importance of Being Earnest has won widespread acclaim as one of the most genuinely funny operas ever written – thanks both to Wilde’s much-loved text and to Barry’s imaginative, surprising and often ridiculous musical setting. Ramin Gray’s 2013 production for The Royal Opera adds on a further level of absurdity, throwing in Irish jigs and a memorably intense relationship with food. During rehearsals for the production’s revival at the Barbican Theatre, we spoke to four of the singers about the opera, and how Barry casts Wilde’s classic play in a new light.

‘Gerald’s idea is that these people are trapped in convention’, explains Paul Curievici, who plays Jack/Ernest. For Claudia Boyle, who plays Jack’s ward Cecily, ‘There is a complete falseness, mocking the Victorian upper class and how they conform. It’s complete satire’.

In preparing the libretto Barry famously cut the play to a third of its length but ‘didn’t remove a single reference to food in the entire piece – which makes it almost exclusively about food’, says Benedict Nelson, who plays Jack’s friend Algernon. For Curievici, ‘Whenever myself and Algernon get foody there’s a sort of a binging, purging element to it. There’s a suppressive self-harming instinct almost’ – ‘and ultimately a violence’, adds Stephanie Marshall, who plays Jack’s fiancée Gwendolen.

Violence is a recurring theme in Barry’s vision. ‘He really takes love and marriage – in the same way as Oscar Wilde does – and makes it an extreme thing, the ultimate violent act’, says Nelson. ‘There’s the very famous plate scene’, Boyle adds, ‘where Barry chooses to have forty plates smashed, when Cecily and Gwendolen meet for the first time. It’s the underlying tension and rivalry between them, and it just builds and builds’. For Paul, ‘My favourite bit of that scene, given Gerald’s obsession with the hysteria that underlies all of those social conventions, is that Gwendolen shoots Cecily five times, to no impact. It’s ridiculous – but the effect is still had’.

Much of the opera’s comic power rests in the surprising directions Barry’s music takes. ‘One of the most charming things about Gerald – it’s now charming but originally it was infuriating – was that if you ask him questions about the music, he just doesn’t understand the question’, says Nelson. ‘If you ask him why something’s forte he’ll say, well, because it’s loud. Or why he’s composed this bit of music – he’ll say, because that’s the ending. Which ends up being very liberating, because it means you can do lots of things as a performer just because.’

But Barry has a very clear idea of the sound he wants. Marshall talks about how ‘I have this Canadian accent, and he prescribed that I listen to 1950s recordings of Edith Sitwell in particular and Diana Mosley, to really try and attain those accents. He was really insistent – incredibly specific’. ‘He absolutely is’, adds Nelson, ‘he’s very prescriptive. But the lovely thing about Gerald is that although he could describe what it is he wants he’s never really interested in describing why – it’s just how it goes’.

Audiences seem to appreciate the effect. For Marshall, ‘I think what I was so thrilled by when we did it last time was the spontaneous laughter that happened at all sorts of different points. It wasn’t that we were ever playing the sort of ba-dum-tish – audiences as a whole found different parts of this opera funny at different times, and spontaneously laughed out loud’. Nelson agrees: ‘It’s very funny. I think it would make other types of music laugh. I think if you could get other types of music round to listen to it they would all find it very funny’.

The Importance of Being Earnest runs until 3 April 2016. Tickets are still available through the Royal Opera House and Barbican websites.

The production will be live-streamed on the ROH YouTube channel on 2 April 2016.