Listen: L’Étoile is ‘not really about the plot but about the silliness of it all’ 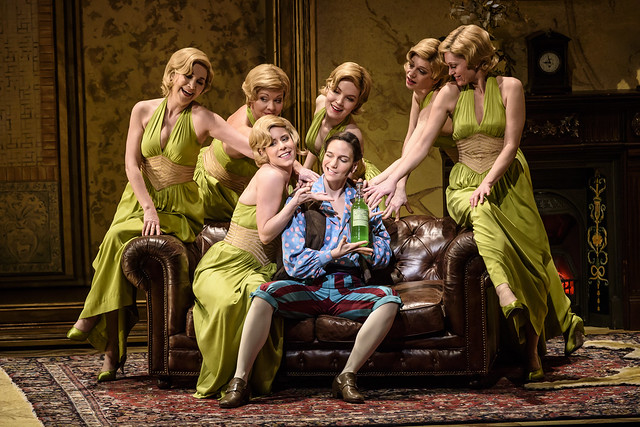 Kate Lindsey as Lazuli and the Chorus of the Royal Opera House in L’Étoile © ROH 2016. Photograph by Bill Cooper

King Ouf I thinks he has found a suitable candidate for his annual public execution in the young pedlar Lazuli – but his astrologer warns that impaling his chosen victim may lead to his own death as well… With a series of even more nonsensical and ridiculous exploits, so goes the story of Chabrier’s comic opera L’Étoile. But ‘it’s not really about the plot’, says Mariame Clément ahead of The Royal Opera’s first production of the work. ‘If you’ve told the story of L’Étoile, you haven’t got very far… It’s about the silliness of it all. It’s about the fun and the absurdity and the nonsense.’

For any director, such silliness can be ‘very liberating because, in a way, you are free to do what you want’. Indeed, L’Étoile is ‘very fun to work on, because you really have the feeling that you’re a child again’. But for Clément, who enjoys the art of storytelling and regularly works on comic operas, the nonsensical element of L’Étoile in particular can also be ‘quite disconcerting… because what do you do with all that freedom? You have to find some sort of structure, some sort of direction’.

Clément, who makes her Royal Opera debut with L’Étoile, resisted the temptation to transpose this absurd story to modern times. ‘The piece needs something that is more elegant maybe, more abstract, and more crazy in a way, more nonsensical.’ So in this new production, she and her creative team opted instead ‘for something that’s a bit of a collage of different ideas, different musical numbers, different obverse situations and sources of inspiration’.

Chabrier’s music takes centre stage in Clément’s ‘collage’. She explains how, despite its initial popularity after its 1877 Paris premiere, the opera slowly fell out of fashion before being ‘rediscovered, and rightly so, for its musical qualities… The orchestration is splendid, and even the melodies: some of them you can come out and hum immediately, and some of them are more complicated and more complex than what you would expect’.

The Parisian audiences that first saw the opera felt in fact ‘disconcerted’ after realizing this was not ‘a standard operetta’. Even the orchestra musicians rebelled, finding the score too difficult to play. ‘Reading the libretto, you expect something very light, of course, maybe slightly superficial.’ But L’Étoile is a ‘deceptive piece,’ concludes the French director. It’s a ‘fantastic work’ with ‘excellent, refined’ music – which may surprise and enchant London audiences as well.