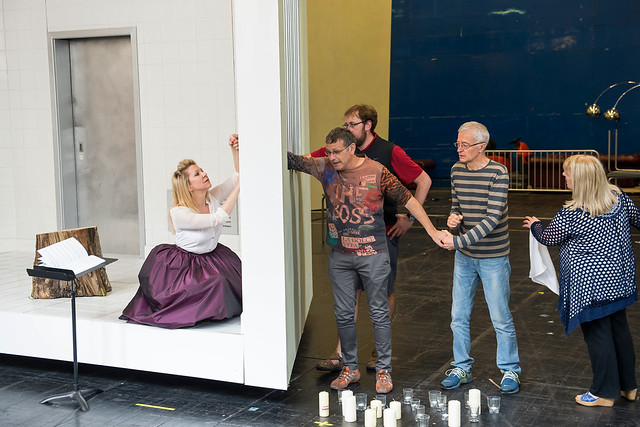 The French directors Moshe Leiser and Patrice Caurier were at first reluctant to add Gaetano Donizetti’s rarely-performed Maria Stuarda to the impressive list of productions they have tackled during long operatic careers. ‘The librettist [Giuseppe Bardari] was 17 year’s old when he wrote it,’ explains Moshe about their initial hesitation. ‘We all admire Donizetti, but we also know that he could write [many] operas on the same day, and actually use the same music for very different operas.’

However, after listening to the glorious music and reading its intriguing, historical libretto, the directing duo realised that Maria Stuarda was a piece very much worth discovering and reinterpreting. ‘We have done, some years ago, Lucia di Lammermoor,’ recalls Patrice about Donizetti’s masterpiece. ‘So it’s really nice to come back to that composer […]. What we work on is the human truth,’ he continues. ‘And there is really something true in every character [of Maria Stuarda].’

For Moshe, the opera is, above all, about political execution: ‘When you hear the first chords of the overture, which are violent, which are very aggressive, it’s about a woman who is going to lose her head.’ But the director points out that their staging does not just focus on the political power of the story, but also explores how the two real-life characters, Mary, Queen of Scots, and Elizabeth I of England, may have felt as women in 16th-century England: ‘Theatre allows us to put a magnifying glass on the different emotions and the links between the characters… We are more interested in the woman that is Elizabeth and the woman that is Maria Stuarda than the queens as historical figures.’

The two Frenchmen stress that, despite their contemporary interpretation, their production aims to remain true to Donizetti’s lyrical music. ‘The bel canto style [of the composer] is trying to sublimate through the music what the words are really saying. So, in that sense, it’s very strong theatre.’ He laments how Donizetti’s operas can sometimes fall out of fashion because of a preference for later Italian composers like Verdi and Puccini. But for Moshe, the beauty of Maria Stuarda is clearly written in the score, and it’s up to directors, singers and other artists alike to simply follow what it says. ‘If we do that,’ he concludes, ‘we can eventually achieve some human truth in that piece’.

Listen to the full interview:

Maria Stuarda will be broadcast live by BBC Radio 3 on 14 July from 7.15pm.